Yorda (ヨルダ Yoruda) is a mysterious and ethereal girl found in the castle in Ico. She is one of the two protagonists, the other being Ico, and is also the daughter of the castle's Queen.

The combat in Ico is focused on protecting Yorda from the shadow creatures which pursue her. Yorda lacks the physical strength or stamina to fend for herself, but Ico nonetheless needs her help as she has the ability to activate many of the magical devices in the castle, including the Idol Gates which block their path.

If Yorda is captured and subsequently pulled into one of the portals from which the shadows emerge, it is game over. The puzzles generally involve finding or creating a route that allows her to traverse an area, so that she can open the gates at the exit, allowing both to proceed forwards.

There are a number of areas in the game where, should one wait long enough, Yorda will point out an object or element of the environment that is either necessary for a puzzle's completion or to be noted as something of general importance. This gameplay aspect was not programmed into the North American release for the PS2, but was available in the North American release of the HD Remaster for the PS3.

Ico first sees Yorda in a dream has when he is knocked unconscious in the process of escaping his casket. In the dream, Ico is shown discovering a shadowy figure imprisoned in a cage. Shortly thereafter, Ico finds exactly what he had seen in his dream, with the exception the girl in the cage is the antithesis of a shadowy creature. Ico manages to free Yorda, but quickly finds that there are other creatures in the castle waiting to return her to captivity. Ico resolves to help her, and the pair work together to escape.

Later in the game, it is revealed that Yorda is imprisoned in the cage by her mother, the Queen, who intends to use her as a spiritual vessel. The Queen's own body is dying, so she will continue to live by taking Yorda's. After Ico succeeds in freeing Yorda from the cage and leading her to the main gates of the castle, the Queen appears before them. She tells Ico that Yorda is her daughter, and reminds Yorda that she cannot survive in the outside world. At this point the Queen withdraws, and the pair continue trying to escape.

When they are finally on the verge of freedom, the Queen appears once again, this time petrifying Yorda. Ico returns to the tower where he was to be sacrificed and faces the Queen. She states that Yorda cannot leave no matter what, and tells him to leave. Instead, Ico fights the Queen, and manages to kill her. Yorda is brought back to life, still herself in mind, but in body she has become the shadowy form seen in Ico's dream. In this form, she seems more assertive and is significantly physically stronger. She quickly figures out what has happened, and as the castle crumbles around them, she carries the unconscious Ico down to the dock and releases him to the waters beyond. However, Yorda herself stays behind in the collapsing castle.

After the credits are finished there is a scene in which Ico, under the player's control, finds Yorda washed up on the beach; she has returned to her white, human form, but now with color blooming on her once-pale cheeks.

During the playable epilogue, it shows Ico finding Yorda washed up on the shore. She has returned to her human form, but it doesn't completely elaborate on what exactly happened to her.

This also seems to be Fumito Ueda's (the director of Ico) point of view on the ending [1].

Another possibility is that the Queen is actually telling the truth to both Ico and Yorda, she could not survive in the outside world. When she saves Ico from the castle, she chose to stay in the castle because she realized that she really couldn't leave. No miracle occured, her life wasn't spared. The epilogue is simply Ico's dream and it's not real, what the scene showed is just the player and Ico's illusion.

Fumito Ueda states in an English interview that this is just one possible interpretation [2]. 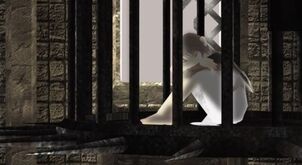 Yorda in her cage, as she is found in the beginning of the game.

Yorda in her shadowy form.