1 major (flower bulb)
Worm is one of the unused colossi that did not make it into the final release of the game.

Worm was a serpent-type colossus like Phalanx, Hydrus and Dirge. It had a long body with a thin section near its head which it could use to bend itself. There was fur on both sides of its body, suggesting that Wander could climb from either side. It also had a giant mouth, and it's likely that it would try and feed on Wander.

According to the artbook, "The flower bulb-like section was its weak point."

The flower bulb is the section of a plant located underneath the soil, at its root. Although it's unknown if that is what Ueda meant for sure, it's possible that Worm's weakpoint was located at its base, underneath the sand.

Many theories over the years have assumed that the text was referring to its head. However, since there's no fur on it, places to grab, or any indication that it is a weak point (such as a texture similar to those of Quadratus' hooves and Basaran's ankles), it is very unlikely. The space inside Worm's mouth is small and dark, and wouldn't work well in a game such as Shadow of the Colossus. Besides that, there isn't any other information, making this one of the most mysterious unused colossi.

Worm was fought at an early version of quadrant G1, on the unused arena known as 'Dune'.

The majority of the evidence lies on the combination of textures listed in Dune, which are mostly only found on the northern side of the Forbidden Lands in early development; such as a texture exclusive to only 'G1' and 'Dune' named "mk_drygrass1", coupled with sand and cliff textures being exclusive to the northern desert. Dune also had a separate model related to it named "dune_par_erea_gate", with "par" possibly being short for "Parthenon", assuming that the Parthenon was supposed to be located in 'H1' before it was moved to 'G1'. Moving Parthenon's model to 'H1' had the valley at the end of the arena match perfectly with the valley from quadrant 'I1', meaning that Parthenon was indeed moved one quadrant west. There existed various 'gate' type models that connected certain arenas to the rest of the world, and only the gate-type models close to Parthenon have "par" in their name; such as "geyser_par_erea_gate", when Basaran was still located in 'I3'.

An interview with the development staff of Shadow of the Colossus released by the Japanese graphical design company CG World contains a drawn bird's-eye view map showing, among other things, the rough shape of the G1 quadrant before Argus was moved into the site. The map proves that G1 used to consist of a large, circular pit encircled by sand dunes, with a narrow pathway, or 'gate', connecting it to H1 (Parthenon) around the southeast. Those features are highly consistent with what is known about the Worm colossus and its arena, as explained above.

The location where Worm was originally believed to have been located is at quadrants B2 and/or C2. In the Preview and PSU Preview demos, a remnant of a desert-like area bordered with cliffs remains at B2, which was believed to be a small leftover of the colossus' arena. However, these exact same style of leftover lands also exist at G0, and in a lot of other places early on in development as seen in the Nico bonus DVD; they are unlikely to be the locations of the arena. 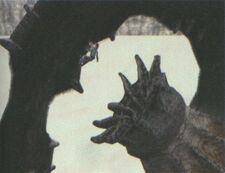 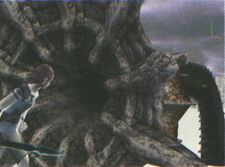 Worm coming out of the sand to attack Wander.

The statue texture of Worm, found in the game's files. Note its circular mouth that can also be seen in the screenshots. 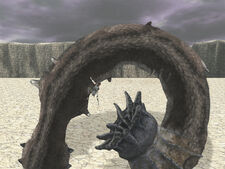 A fan rendition of what the fight against Worm may have looked like - by Nomad Colossus.