Wander (ワンダ Wanda) is the protagonist of Shadow of the Colossus. A young man with a clouded past, he travels to the Forbidden Lands on horseback in order to resurrect a girl named Mono. Dormin, a mysterious voice presiding over the Lands' central shrine, gives Wander a deal: if he can slay the sixteen colossi that reside in the Lands, Mono will be resurrected.

Wander has shoulder-length, red hair that is accessorized with a blue headband, as well as blue-gray eyes. He wears a short-sleeved shirt that varies in shades of brown, and over it sports a cloak with a symbol resembling the major sigils on the colossi. His arms are wrapped in bandages and blue wrist-guards. He also dons knee-length shorts that are a faded green and blue sandals with shin-guards.

Over the course of the game, his appearance slightly changes with every four colossi that are defeated. His clothes will become dirtier, his skin paler, his hair will darken, and markings will appear on his body. He also begins to grow a small pair of horns on his head.

Wander's past is unspecified in the game, but he appears to be from the same tribe or social group as Lord Emon, and he was somehow involved with a girl named Mono. He is an excellent horseman, able to navigate difficult terrain as well as turn in the saddle and even stand up while at full gallop. The familiarity with which he holds a bow and uses it on horseback also testifies to his experience with that weapon. However, some have pointed out that Wander's skills with the sword are apparently negligible; even when swinging his sword without the challenge of an opponent before him, Wander's blows are slow and clumsy. Wander's greatest strength, then, is his tenacity. Although perhaps not the best warrior, he is determined to save Mono at any cost and will stop at nothing to defeat the colossi that stand between him and Mono's resurrection.

The story of Wander begins with him entering the Forbidden Lands, traveling across the long bridge at its entrance on his horse Agro. Prior to entering, he had stolen a magical sword, which is the only weapon capable of slaying the colossi of the Forbidden Lands.

Led to the massive Shrine of Worship at the center of the region, Wander carries with him a body wrapped in a cloak, which he lays upon an altar in the shrine. Removing the cloak, the body of a barefoot maiden named Mono is revealed. A moment later, several shadow creatures with humanoid forms appear and prepare to attack Wander, but he easily dismisses them with a wave of the Ancient Sword in his possession, which emits beams of light. After vanquishing the shadow creatures, the voice of the disembodied entity known as Dormin echoes from above, expressing surprise that Wander possesses the weapon. Wander requests that Dormin return Mono's soul to her body, which it states may be possible, but only if the sixteen idols lining the temple's hall are destroyed. It explains that this task can only be accomplished by using the ancient sword to kill sixteen colossi located throughout the land.

Despite a warning from Dormin that he may have to pay a great price to revive Mono, Wander sets out to search the land for the colossi and destroy them. In a sequence after the eighth colossus is slain, a deterioration of Wander's body is shown clearly: his skin becoming paler, his hair darker, and dark streaks growing across his face. Also in the sequence, Wander envisions as if in a dream that Mono awakens and calls out to him, yet as he attempts to approach her, he is quickly dragged away. Meanwhile, Mono's complexion improves and her voice can be faintly heard after each colossus has been killed. After the death of the twelfth, it is revealed that Wander is being pursued by a group of warriors led by Lord Emon.

Urged to hurry with his task by Dormin, Wander soon heads off to defeat the sixteenth and final colossus. On the way to this confrontation, he travels on horseback across a long bridge, which begins to collapse as he is halfway across. As Agro jumps over the last gap in the bridge, the portion she lands on begins to separate from its foundation, causing her to nearly lose her footing. Sensing the impending fall, Agro jerks forward to throw Wander to safety on the other side, sacrificing herself and falling into the river hundreds of feet below as the bridge finally gives way. Wander goes on to defeat the final colossus, and Emon's company arrives at the Shrine of Worship just as the last idol crumbles; Wander appears soon afterwards, his eyes and skin now both entirely pale and two small horns protruding from his head. Declaring that Wander has been "possessed by the dead", Lord Emon orders his warriors to kill him. While he struggles to reach Mono, one warrior shoots Wander in the leg with a crossbow while another stabs him through his heart with a sword. Black blood sprays from the wound as Wander's body becomes covered in darkness and falls to the floor — a death identical to those suffered by the colossi.

Afterward, Dormin's spirit possesses Wander's body, transforming it into a shadowy giant. Dormin, now speaking in its masculine voice, explains that Lord Emon's ancestors had separated it into sixteen segments in order to seal away its power "for an eternity". While his men flee, Lord Emon casts the Ancient Sword into a small pool at the back of the shrine's hall, creating a whirlwind of light that consumes Dormin, and despite the player's ability to control his attempts to escape, ultimately Wander is sucked in as well. Emon and his men flee the Forbidden Lands as the bridge connecting to the temple collapses behind them. As they safely arrive at the entrance to the Forbidden Lands, Emon expresses hope that if Wander survived, he will someday be able to atone for his crimes.

In the Shrine of Worship, Mono awakens, restored by Dormin in accordance with its agreement with Wander, and Agro limps into the shrine with an injured hind leg. Mono follows her to the pool into which Wander and Dormin were pulled by Emon's spell, finding a male infant with tiny horns on his head. She takes the baby Wander with her, following the horse to higher levels of the Shrine of Worship, and arrives at a secret garden within the shrine as the game ends. 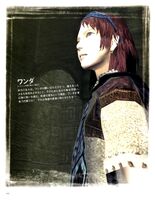 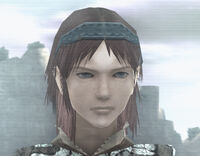 Close up of Wander's face at the beginning of the game. 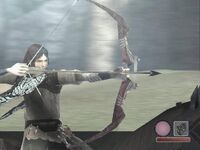 Wander drawing his bow on horseback. 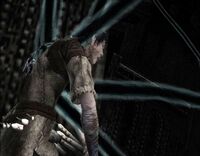 Wander as he appears after defeating all the colossi.

The horned baby Wander in the arms of Mono.

Sketch of Wander taken from the official artbook.

The limited edition figurine of Wander and Agro released exclusively in Japan.

Test heads and the early model of demon Wander's head.