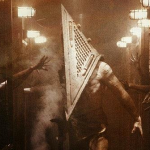 Hey there all, I'm Ozz! I reside in North Carolina as a serious lover of art, video games being probably my favorite form. I'm a long-time Shadow of the Colossus fan, the game essentially blowing my mind the first time I experienced it with its unique style and mysterious storytelling, and I hold interest in both Ico and The Last Guardian as well. My experiences with the games are as follow:

Here on the wiki, you will see me doing a lot of maintenance edits like fixing grammar, formatting, and linking errors, most likely. I'm one of the admins at the Silent Hill wiki (SH2 ties SotC as my all-time favorite game, and the whole series is dear to me) and learned there that it's the little edits that help greatly in making a wiki reputable. I hope to give all I can to the Team Ico wiki!

Retrieved from "https://teamico.fandom.com/wiki/User:Ozzkat?oldid=17327"
Community content is available under CC-BY-SA unless otherwise noted.