Trico (トリコ, Toriko) is the name of the griffin-like beast in The Last Guardian and the deuteragonist of the game. It looks like a combination of a dog, bird, and a cat. The mysterious masked knights searching for the Boy are no match for its power and ferocity. The boy will need to take care of Trico, both by feeding it mysterious barrels and removing spears from its hide.

Trico is a large, hybridized beast with the face of a dog, the ears, body and tail of a cat, and the beak, wings, talons and feathers of a bird. It also sports a pair of horns on its head. Its feathers are a grayish blue with darker feathers on its tail, wings, and nose, while having lighter feathers on its face. The beast's eyes change colors depending on its mood.

Trico's appearance also changes over time. At the beginning, its wings are in tatters, and the horns are broken. By the end of the game, the wings are fully healed and its horns are about a foot long and slightly curved forwards.

The gender of Trico has been a debated topic, with some people saying it is male and others female. However, there is no confirmed answer and Fumito Ueda himself has touched on this subject in an interview found on GenDesign's website:

Ueda: From a creator point of view, there isn't much benefit in limiting it to one or the other. Besides, the biggest reason was that we didn't want to restrict the freedom of ideas in gameplay by giving it a specific sex. We didn't want to restrict the way players understood it. And there's also the fact that we wanted people to feel that the virtual character was appealing and realistic as a living creature.

Masami Tanji: I see, you didn't want to limit the possibilities by deciding of the sex.

Ueda: In that way there’s a big advantage because both sexes can be included; you can make players feel that it is strong like a father, gentle like a mother, cute like a girl, and innocent like a boy.

Trico first appears in the cave with the boy, unconscious and wounded. After the Boy cares for the creature, the two start to bond and Trico follows the Boy around.

As the two make their way through the Nest, Trico defends the boy from enemies large and small and helps him access areas and cover ground very quickly. Trico's bond becomes so strong that the beast would protect the Boy from seemingly anything.

It is discovered that Trico is one of many other beasts like itself and was once enslaved to an entity called the Master of the Valley, who controls the beasts and uses them to kidnap human children to sustain its own immortality. However, the Master's control over this creature was broken when Trico was hit by lightning after stealing the Boy. Fearing the power of the now independent beast, the Knights chained Trico up in the cave, hoping it would die from the wounds it sustained from the lightning and the long fall. However, Trico regurgitated the boy, who helped the beast recover and escape.

The two gain entrance to the Master's citadel tower. While Trico holds off a large pack of Armored Tricos, the boy destroys the Master. Badly wounded, Trico decides nonetheless that it is now time that the Boy returned to his village. Upon returning the Boy home, Trico leaves for its own safety, leaving the Boy to tell the story of their extraordinary adventure.

In the final cutscene, it is revealed that Trico not only survived its agonizing wounds but has gone on to sire a young Trico of its own, raising it in the cave where the whole adventure began. It still seems to remember the Boy fondly when it hears the call of the Boy's (now a man) mirror.

Trico behaves much like a typical domesticated dog. At first, Trico does not trust the Boy, even swiping him into a cave wall when the Boy tries to remove spears from its body. However, after receiving food and care from the Boy, the beast trusts him enough to follow him around. As time goes on, Trico even seeks affection in the form of being fed or being petted, which calms it down after a battle. Trico will also bestow affection on the Boy, rubbing its head against him and nuzzling while making loving whines. Once Trico becomes fully bonded, the beast will protect the Boy without a thought to its own personal safety, even taking on a pack of Armored Tricos without hesitation.

Trico is a creature one would do best not to make an enemy of. When the Boy is endangered or it perceives a threat, Trico goes into a bloodthirsty rage, destroying said threat with vigor. Even if Trico is outmatched, the beast will still throw itself into the fray, fighting until either killed or knocked unconscious.

It is possible that Trico is a younger or less experienced beast, while quite effective against Knights, is easily overpowered by Armored Tricos, even in one-on-one encounters. It is also shown to be rather clumsy as, when kidnapping the Boy in his sleep, the beast gets its head stuck in a window and knocks over a pot, alerting the village to its presence.

This also is supported by how the Boy pronounces the creature's name (in spite of the subtitles reading "Trico"): "Toriko". This name has the suffix "-ko", which can refer to a child or a baby.

The first-ever screenshot for the game (and the only screenshot of the game released for well over two years) depicted a giant length of chain running into a hole in the ground. In the game's first trailer, the creature on the end of the chain was revealed to be Trico.

The gameplay of The Last Guardian stems around using Trico's natural instinct to the player's benefit in order to traverse the environment and solve puzzles. Trico reacts based on its surroundings and mood and cannot be controlled directly.

"Toriko" is the Japanese word for "prisoner", possibly given during the initial predicament. "Toriko" is also a combination of the Japanese words "tori" (bird) and "neko" (cat), and also has the suffix "-ko", which can refer to a child or a baby. Finally, Project Trico was the name for the game's working title, which is a combination of "Tri" and "Ico". This could be referring to the game itself, which is Team Ico's third release.

It is possible to navigate through the land on Trico's back to surpass obstacles or reach certain heights.

Trico sitting similarly to a cat.

Trico looking back at its companion.

Trico firing lightning from its tail.

Trico in the sunset.

Trico flying, prior to being struck.

A concept of Trico. 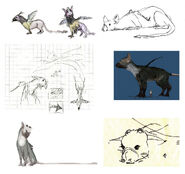 Another concept of Trico.