Team Ico Wiki
Register
Don't have an account?
Sign In
Advertisement
in: Ico and Shadow of the Colossus Collection, BluePoint Games Studio, Fumito Ueda,
and 5 more

The ICO and Shadow of the Colossus Collection

Both games feature 3D support and trophies. The Ico remaster includes features originally exclusive to the Europe/PAL version, such as two-player cooperative play during a second playthrough. In the NTSC and PAL regions, the games are on one Blu-ray disc, while in Japan they were released as separate titles. The Collectors Edition (available only in Japan) includes two PlayStation 3 XMB themes and a collectible booklet covering both games. The collection in other countries features two dynamic PS3 XMB themes and exclusive behind-the-scenes videos, including the Nico video previously released only as a preorder bonus for Shadow of the Colossus in Japan on DVD.

Graphical updates include consistent 30 frames-per-second gameplay during 2D play, more detailed textures, and better anti-aliasing. Both games can be played in full 720p or 1080p.

The core game and story for both Ico (2001) and Shadow of the Colossus (2005) remains unchanged with the remastered versions. For the remastering, both games have had a graphics overhaul to allow them to support modern high-definition displays up to 1080p. With the more powerful PlayStation 3, both games feature a fixed frame rate of 30 frames per second; the original PlayStation 2 version of Shadow of the Colossus was noted for pushing the limits of the older console and often suffered from framerate losses. Both games support stereoscopic 3D, taking advantage of the original design of the games with considerations towards depth-of-field viewing as evidenced by the large landscapes. Both games in the collection support 7.1 surround sound.

The collection includes bonus content, including two XMB Dynamic Themes and exclusive video content for Ico, Shadow of the Colossus, and The Last Guardian.

Ico's remastering is based on the European version, which features additional content that did not make it into the North America release of the original game, as well as some altered puzzles from these original releases. Specifically, upon completing of the game, the player can restart the game to see the English translations of the mysterious language that Yorda, the player-character's companion, uses, and a two-player mode with the second player in control of Yorda. Though there was consideration for inclusion of PlayStation Move motion control support, the final game does not ship with it.

Shadow of the Colossus HD

Shadow of the Colossus has a difference in the gameplay involving Wander's stamina. Climbing in general has been made more difficult in this version, with Wander's stamina depleting more quickly or easily than it did in the PS2 version. Along with this, Wander is more easily knocked off his balance or tossed around when on top of a colossus. Additionally, the game's framerate is dramatically slowed for a few seconds as Wander strikes the final blow to a colossus' weakpoint sigil, rather than immediately transitioning to death sequence upon the final stab as it did in the original.

31 Trophies can be earned in The ICO and Shadow of the Colossus HD Collection.

Prior to the announcement of the Collection, two other remastered collections of PlayStation 2 games had been made for the PlayStation 3: the God of War collection, and the Sly Cooper collection. There had been strong interest by Fumito Ueda, the project lead for both Ico and Shadow, to prepare such a collection for the Team Ico games.[1] Initially, Ueda was not "too excited" about porting the games, given that they were designed specifically for the PlayStation 2 hardware.[2] Ueda also noted that that such a conversion may be difficult due to the complexities Team Ico had to create to push the technical limits of the PlayStation 2, but felt that it was still possible.[3] As the PlayStation 3 became more popular, and PlayStation 2 consoles became rare, Ueda reconsidered his position as to allow other consoles to see these games.[2] Ueda noted that such a release would depend on Sony's executives.[1]

Work on the conversion for the collection was done by Bluepoint Games, who had previously performed the remastering for the God of War collection.[4] The staff of Team Ico assisted in the process. Ueda considered Bluepoint Games as "real craftsmen" in this porting effort, through their understanding of the fundamentals of Ico and Shadow of the Colossus and passion for the games.[2] Though Ueda wanted the ports to provide stereoscopic 3D imaging, he praised Bluepoint for their work in fine tuning the 3D effect, taking advantage of the scale and camera provided by the existing games; Ueda stated that the developers "made it into something beyond what I imagined".[2] There was consideration to add new game content to both games. One example Ueda noted was adding in several colossi that were cut from the PlayStation 2 version of Shadow of the Colossus. Ultimately, Ueda and the team decided not to include this, being concerned that such additions may be considered "half-baked" by players, and instead opted to stay "faithful to the base work".[2]

The collection was formally announced at the 2010 Tokyo Game Show.[5] In the months prior, the collection's existence was hinted by industry rumors and appearances of the collection on on-line vendor catalogs.[6]

In North America and Europe/PAL regions, the two games were released as a single collection.[7] This version also features a reversible cover insert, with the original PlayStation 2 cover arts for both games on the inner side of the case. Because of the criticism of Ico's original North American cover art, the North American version of the collection used the European/Japanese cover by Ueda. However, bilingual copies from Canada do not include the reversible artwork - they have a blank white interior.[8]

In Japan, they have been released as separate titles,[9] though retailers have also listed a boxed collector's set containing both games and additional material.[10]

The collection received strongly positive praise from game reviewers on release, not only based on the original titles but on the improvements made in the high definition port.

During the week of its release, the game was the top selling game across all platforms in both North American and Japan, based on sales data from Amazon.com. 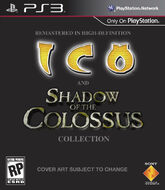 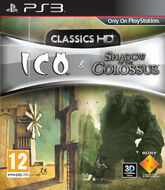 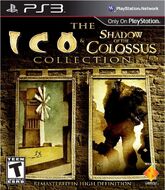 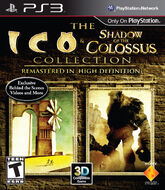