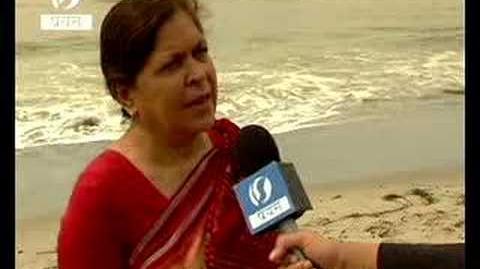 The Tsunami Giant is one of the five mini-viral marketing subjects for Shadow of the Colossus. First posted on viral hub site Giantology on October 6, 2005 (twelve days before the game was first released), this was the second of the hoaxes to be posted (the first was the Jebal-Barez skeleton, posted the day before). The hoax featured the 1st colossus, whose remains had been washed up on the shores of Tamil Nadu.

A visitor to my site emailed me this video (.wmv file / .mov file [archived link, .wmv file not working]). I've managed to pull the video file so I can host it here and study it more closely. Be patient with the downloads, they're well worth it.

(Please indulge me regarding the URL watermark. It had to be done for obvious reasons. By which I mean, I'm trying to publicize my site a little.)

My mind is totally blown. You must watch it. It appears to come from an Indian news service, translated into English, showing what looks like a colossal creature uncovered by last year's tsunami. I've watched this video about a dozen times, and it looks real.

All I know is, the hair on the back of my neck is standing on end.

Been getting a ton of hits over the video of the tsunami giant, and lots of comments from visitors. I don't have time right now but I'll post my response to comments later.

If you haven't seen it yet, click to see it as a .WMV or .MOV file [see above for links] .

I'm at the top of today's news at this "mysteries of the unexplained" news site!! How cool is that!

Is the Tsunami video a hoax?

Many of your comments have strongly suggested that the Tsunami video is a hoax.

What do I think?

I've been studying this video like a 60s assassination film, and I'm now leaning towards agreeing with that analysis. You've all made some convincing arguments, both pro-tsunami video and anti-tsunami video.

I'm working on a podcast to offer some detailed comments on the whole thing, which is partly why I've been so scarce in my posts lately. I'm also trying to move over entirely to Giantology.net, and having some technical difficulties. Look for my first podcast in a day or two and the move to Giantology.net shortly afterwards.

As for the hoax thing, I read an interesting article suggesting that even the legit news stories claiming that an ancient city was uncovered in the tsunami is a hoax. (I unfortunately cannot find the article! I think someone either emailed it to me or I found it while doing some research, but the gist of the story was that the "uncovered city" was really already known about for many years.)

Meanwhile, there's still the underwater Sulu Sea giant [archived link], the giant squid and the Iranian "Skeleton of Jebel-Barez" that have recently been discovered around the world.

Which leads me to ask... just what the heck is going on here???

If anything, my resolve to continue my investigations is even stronger, given the huge public interest in the tsunami video. The fact is, we know very little about the Earth's history, or the creatures that have lived on it. We don't even know all the creatures that live on Earth today, let alone since the first single-celled animals started growing gills and legs and breathing air. I think it's worth looking into, to find out whether those so-called legends of giants may not be legends at all.

The lady interviewed in the (fake?) news clip says she used to hear stories about "giant creatures that lived here." So is it possible that such a creature actually existed? That maybe some legendary giants were possibly accurate depictions of living creatures? Regardless of the truth of the tsunami video, I remain intrigued!

Unlike the other four hoaxes, the Tsunami Giant hoax did not have a website - just a link to a video of a translated news report, which can be found below.

Since the movie was hosted on Giantology, it was taken down with the site in May 2006.