Stonehenge is the developer name given to the unused arena of Sirius, one of the unused colossi.

A vast green field with multiple rocks scattered around. Several stonehenge-like structures existed, which were used in the fight against the colossus. The arena was also partially surrounded by the ocean, as a cliff edge is seen in the Nico DVD footage and textures from its test stages reveal that it had water, with it becoming separate from the main model after it was implemented into the map.

The arena was likely located at quadrant E8. 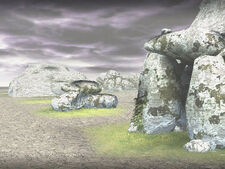 Screenshot of the arena from the Nico bonus DVD. 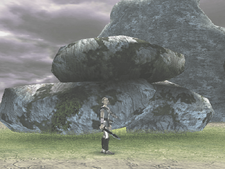 Wander standing next to a broken stonehenge from the Nico bonus DVD. 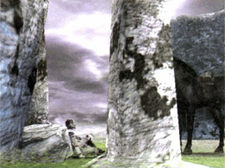 A mock-up of Wander sitting next to the stonehenge structure, taken from the artbook. 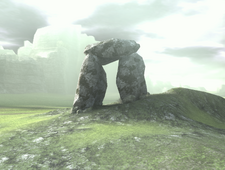 The stonehenge structure in the final game.

Textures of the arena's main model.

Textures usually listed in the breakable stonehenge objects. The texture "mk_world_wall_mip01" is only listed in "stonehenge_roof".

Comparison of Stonehenge's chip data with G7's. Sirius' arena lacked three chip models on the southeastern part of the quadrant it resided, while G7 is a full quadrant. 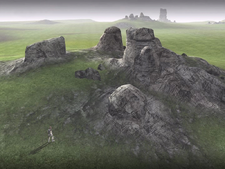 Early G7 with the stonehenge structure missing on the top left.