1 major (underside)
Spider is an unused colossus that was cut from the final version of the game. Its name was given by the developers as it looks like a daddy longleg.

Fumito Ueda spoke about the Spider and his reasons for its removal in two interviews: "Spider was meant to be defeated by slashing it with your sword while riding Agro, but if you're putting in special motions just to take down a Colossus, then it's not really elegant. However, the idea of this strategy was used for the turtle (the ninth Colossus). I tend to put a lot of emphasis on whether the game design makes sense, whether it's elegant [1]."

"The concept was great in theory, but difficult to create in practice. We were unable to make it happen during the programming phase [2]."

The earlier version of Spider with black tentacles was much smaller than its later version, which was one of the tallest colossi, standing at around 38 meters high. It had six legs with glowing weakspots which would need to be slashed to make it fall. It also featured sharp, teeth-like horns on its underside, surrounding its sigil. Its head was hexagonal in shape, with vegetation growing on top.

According to the artbook, "it was defeated by leading it from water to land", so the location of the battle was near a watery area. As stated above, Spider's weak spots were on its legs, and after Wander had hit an unknown amount it would have "destroyed its posture".

In the OPM, PSU and E3 demos of the game, Wander has the ability to swing his sword sideways while on horseback, which was the main way to target its legs. This ability would be removed in all later versions.

Spider lived in the unused arena known as Hillock; and while it's located somewhere in the "F" column in the artbook screenshots, it was quickly moved to "D3". The textures from Hillock are mostly found in areas surrounding D3, and one of the hill-like mountains in Geyser looks very similar to the one in the screenshot with the version of Spider with tentacles. The likely scenario is that Basaran got moved from I3 to D3 after Spider got cut, merging both arenas together. 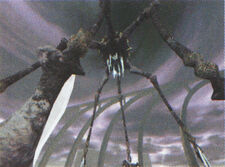 Underside of Spider. Note the blue ball of energy at the center of its spikes. 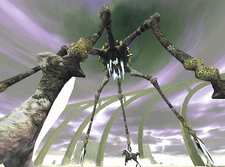 Uncropped version of the previous image, from the Chronic'art French magazine. 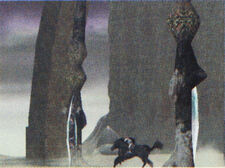 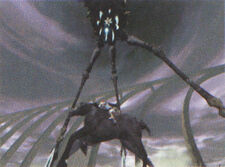 Wander and Agro riding underneath Spider. 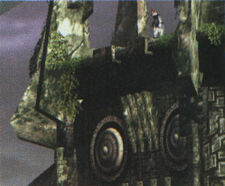 The top of Spider's head. 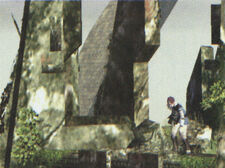 Wander, in blue garments, on top of Spider's head. 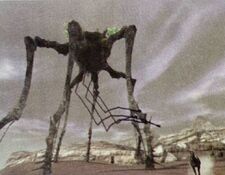 Alternate design for Spider that originated from a Famitsu magazine dated December 2nd 2005.

The Famitsu magazine showing Phoenix and the alternate design of Spider. 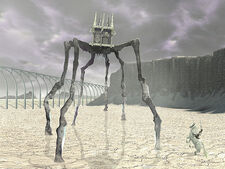 An old fan rendition of what Spider may have looked like made by Nomad Colossus. The model represented here is not accurate to how it actually looked like.

Model of Spider from the fan project known as Tribute to Shadow of the Colossus.