Sluice is the developer name given to the unused arena of Yamori A, one of the unused colossi. The picture shows the area near the entrance to the arena.

It's unknown what the inside of the Sluice looked like, as the only pictures available of its location are of its entrance and the low resolution texture of B3. It featured unique-looking pillars along a pathway leading to a cave entrance.

The arena itself likely took place inside an underground cave, as it had textures similar to the light that comes out of the hole in Dirge's cave in the final version, and the texture segment named "sluice_sky_blind" suggests it had such a feature as well. It's also likely that it had a man-made structure inside it, as indicated by the texture segment named "sluice_inner", which lists a number of 'steel' and 'block' textures. The shape and size of the arena in the early B3 quadrant texture seems to match with Kuromori's oasis-like area before entering the temple leading to its Underground arena; whether this means that the Sluice was reused later to be part of Kuromori's arena or not is unknown.

The texture segment 'sluice_water' in the PS3 data sheets proves that the arena contained water, something that can also be inferred from its developer name, which references a water-sliding gate mechanism usually installed on water barrages and/or dams.

The arena was located on the west side of the Forbidden Lands, next to Lair to the West, at quadrant B3.[1]

The retail and preview versions of the game feature a pathway to the northern side of B4 leading up to a dead-end at B3, which might be a leftover of what used to be the path that led to the Sluice when it was still in the game. 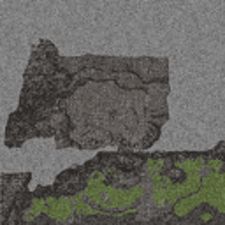 The super low resolution texture of B3 found in the OPM Demo. 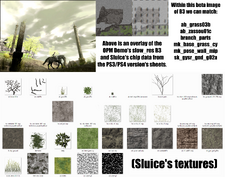 Summary of most of the evidence found regarding B3 being Sluice, and the location that the image with the pillars was taken.