1 major (back)
Sirius was an unused colossus that was removed from the final version of the game. It was cut "as the way to defeat it just wasn't working out".

Sirius was a relatively small colossus, about the same size as the 11th and 14th colossi (though a little taller than both), resembling a giant boar or hog. Unlike those colossi however, Sirius had relatively little body armor and an exposed back with fur on it. This indicates that its weak spot was constantly exposed during the battle.

Sirius was, also similar to the 11th and 14th colossi, very fast and - possibly - very aggressive. It had to be defeated while riding Agro, as it would chase the player at high speed. Because it had virtually no body armor, the main obstacle of fighting this colossus was not removing it, but simply getting on its back.

The artbook gives a clue about how Sirius had to be defeated, as it says: "rocks meant to be used in the fight with Sirius", with a picture of a stonehenge-like monument. It can be assumed that Sirius would chase Wander while on horseback, and the player had to ride through this monument, making Sirius hit the rocks, causing them to collapse on it. Evidence in the PS3 data sheets reveals that the rocks would break into various pieces, and more than one existed in Sirius' old arena, as you can see a second stonehenge-like structure in the background of a screenshot of it. One of the monuments can still be found in the released version of the game, at quadrant G7.

In the final game, after the 14th colossus' armor is broken, it becomes vulnerable to the various objects throughout the Ruins. It falls unconscious whenever hitting one, getting up after a few seconds, while an animation that originated from Sirius plays where it takes three steps backwards. This could suggest that Sirius fell unconscious the same way as the 14th colossus does, whenever hitting one of the stonehenge rocks.

Sirius was located in the arena known as Stonehenge, most likely located at quadrant "E8". Early pictures of E7[1] and footage of Wander travelling from E6 to E7[2] show a swirling sky and beam that form above a Colossus arena located on top of E8. The chip data of Stonehenge seems to match the early version of quadrant F8 when placed next to it; and its textures match the early version of E7 and F8.

Early theories placed it on G7, with the only proof being the stonehenge structure seen at G7 matching the one used in Sirius' fight as described and shown in the artbook. The chip data of Stonehenge doesn't match G7's however; and in an early picture of G7, the stonehenge structure is nowhere to be seen. G7's unused layer 2 chip data had a model where the stonehenge rock is currently located, suggesting it was moved there temporarely before being implemented in the area's main model. Several other broken stonehenges can also be seen throughout the Forbidden Lands. 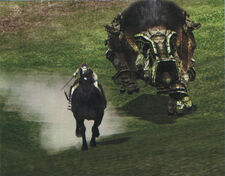 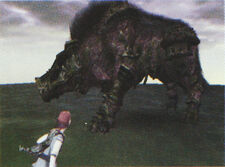 A side view of Sirius. Note the height difference with Wander. 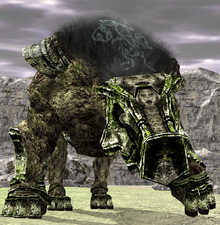 The model of Sirius made for the Tribute to Shadow of the Colossus fan game. 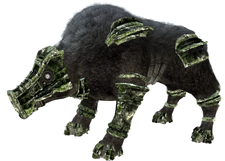 A fan rendition of what Sirius may have looked like. Made for Beyond the Forbidden Lands.