Start a Wiki
watch 01:31
'Team Ico' Lore: Shrine of Worship
Do you like this video? 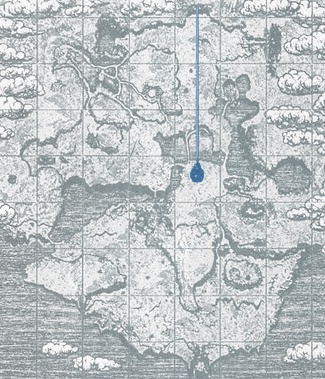 The Shrine of Worship is a massive structure located near the center of the Forbidden Lands. It serves as the hub of the game, as Wander is returned to the Shrine after he defeats a colossus.

Even though the Shrine is in the center of the Lands, it is the first area that Wander actually sets foot in, as the only entrance to the Lands is an enormous bridge that spans halfway across the Forbidden Lands that leads directly to the Shrine.

There are two main areas in the Shrine. The first area Wander enters is a cylindrical room with a lengthy, spiral ramp winding around its edge, which Wander walks down to get to ground level. This room also contains a shallow basin of water. In addition to being important to the plot, the basin is where all Time Attack rewards will show up once unlocked.

The second area is the main hall of the shrine, containing the altar where Mono is placed, the idols representing the sixteen colossi, a balcony that over looks the land to the north, and a great sunlit aperture in the ceiling of the main hall where Dormin talks from.

At the end of the game, Agro and Mono try to exit the shrine, only to find that the giant bridge has collapsed. They notice, however, a path to their right, which leads them to a beautiful courtyard filled with fruit and various animals (including some not previously seen in the Lands). This location has been referred to as the "garden" or "secret garden" by fans.

It is possible for Wander to climb up the temple (see below) and explore this area. However, none of the animals mentioned above are present, and consuming the fruit will actually lower both Wander's maximum health and stamina considerably. Fumito Ueda, the game's director, puts this in a positive light, however: "The fruit in the ancient land was set to get you closer to non-human existence. The (secret garden's) fruit was set to return you to a human one".

Several animals can be found in the Shrine's garden with Mono at the end of the game. A few of them are not seen anywhere else, including a fawn and a chipmunk. The latter two are not present in the original American release.

Climbing up the Shrine

It is possible to climb up the Shrine all the way to the other side of its northern (back) entrance. From there, Wander can go to the garden or run all the way across the bridge to the Forbidden Lands' main entrance. He cannot exit the Lands, however; a mysterious gust of wind will force him back. In the original release, leaping diagonally up the path conserves stamina, as it takes almost no stamina to leap diagonally, and a small ledge could be utilized to rest on. As of the 2011 HD release, leaping diagonally now drains as much stamina as any other directional vertical leap, and it is no longer possible to rest anywhere on the climb up.

Note: the following video walkthrough is relevant only to the original version of the game (attempting the following in the 2011 HD release will not work). 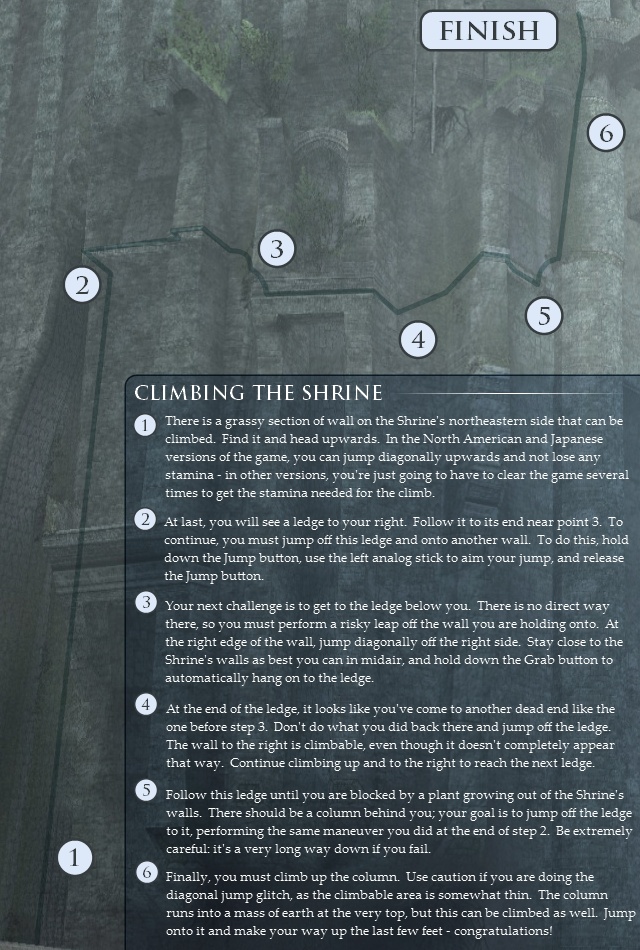 Top of the Shrine

The garden is the highest the Shrine can be climbed. It was not meant to be climbed any higher in the final game; those who have tried to climb higher through various glitches, cheats, or other exploits found that much of the ground had no collision detection, and that still higher geometry had no texture mapping. This was not always the case, however. Early builds of the game had a fully-textured top-half of the Shrine; apparently, it was originally planned for Wander to be able to climb all the way up to the top. Since something of that large a scale and so low a development priority was not worth the time required to implement it, however, the idea was scrapped.

Unlike entering a battle with one of the sixteen colossi, the Shrine of Worship does not have a theme that automatically begins to play. There are, however, several pieces of music that are featured in cinematics with the Shrine as their location. "Prohibited Art" and "Epilogue ~Those Who Remain~" are the only pieces to uniquely play in the Shrine, whereas "Commandment", "Black Blood", "Resurrection" and "Demise of the Ritual" can be heard elsewhere. "Prologue ~To the Ancient Land~" does not play in the Shrine itself but plays during Wander's journey up to the Great Bridge; this is the first—and rather maginifcent view—of the Shrine that players are given. 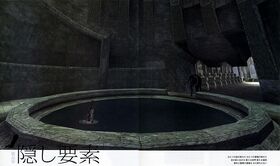 The cylindrical room with the basin; Wander and Agro can be seen in the picture. 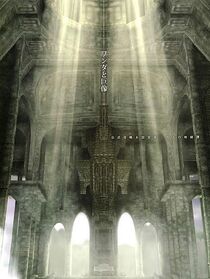 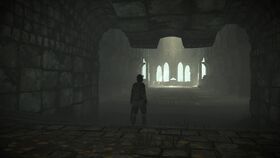 Wander looking into the Shrine's hall of idols 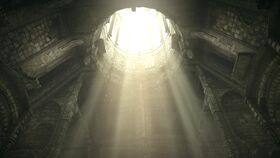 The circular aperture in the ceiling which Dormin speaks through 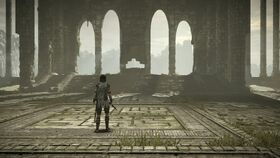 Wander looking toward the altar 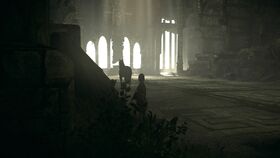 Wander standing before a crumbled idol 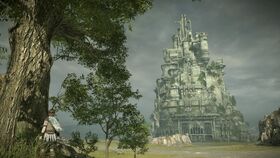 External view of the Shrine of Worship 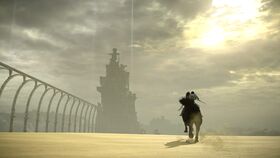 View of the Shrine from within the under-bridge desert 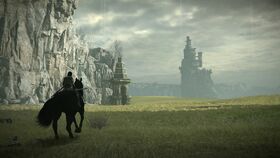 View of the Shrine of Worship; a minor (prayer) shrine stands in the foreground 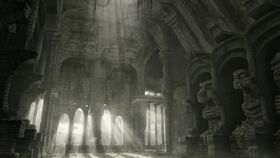 Concept artwork from the 2018 remake; art by BluePoint Games 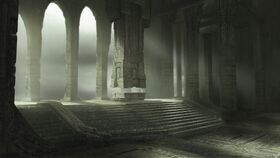 View of the altar; concept artwork by BluePoint 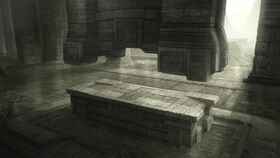 Concept artowrk of the altar; BluePoint 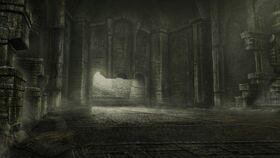 Concept of the back of the hall, leading to the circular pool; BluePoint 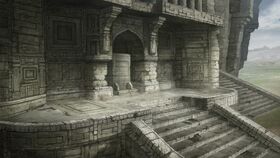 The prayer shrine beneath the altar; BluePoint
Add a photo to this gallery

Retrieved from "https://teamico.fandom.com/wiki/Shrine_of_Worship?oldid=18369"
Community content is available under CC-BY-SA unless otherwise noted.