Yes
Saru (lit. "Monkey" in Japanese) is a colossus that, for unknown reasons, did not make it into the final version of the game.

Saru's shape seems to be based around a orangutan, with long arms which it used to swing around the stalactices of its cave. Its legs were tiny and probably wouldn't be enough to support its whole weight. Its small head sat at the top of its torso, surrounded by crown-like spikes.

The artbook says, "It hung from the ceiling, and you'd defeat it by dropping it to the floor." That, coupled with early sketch designs, indicate that Saru was fought in a cave-like area where it would hang onto stalactites. It is unknown how Saru would attack, but theories often say it would throw stalactites at the player; although no known evidence of stalactites being separate objects exists in the PS3 data sheets. The idea of a colossus throwing objects was mentioned in an interview, but it is unknown if it relates to Saru. Wander would also likely had to either shoot the stalactites Saru was hanging onto or its arms to make it drop.

The image of Wander climbing Saru's back shows part of the debug menu. Translating it reveals that it may have lived in an arena named "Cave", and the coordinates, which are from Agro, don't really point to any location and are just limited to its test stage. It's likely that Saru never made it into the map as it was cut very early into development.

At one point, it was widely believed that I3 must have been Saru's lair, since B4's cave already had Dirge in it and the Preview version seemed to point to the existence of a cavernous structure in the I3 quadrant. However, further analysis revealed that I3 was actually just a flat plain and most likely Basaran's early arena.[1] 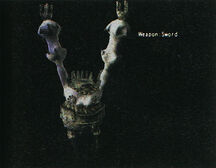 A picture of Saru. 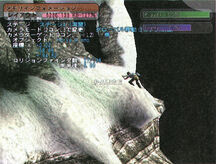 A test shot of Wander holding onto Saru's back. 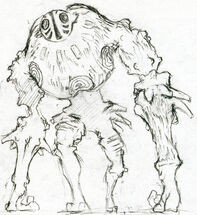 Sketch of Saru with an appearance that was more humanoid in shape. 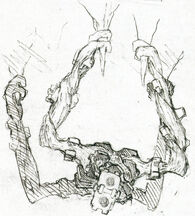 Sketch of Saru with it using its four limbs to grab the stalactites. 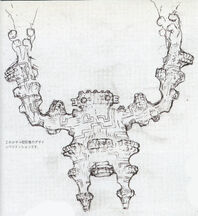 Sketch of Saru with an appearance closer to its in-game one. 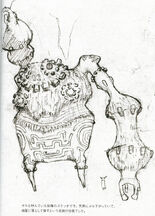