Roc (or Avus, its fan-given name) is one of many colossi that were cut during the final stages of the game. Its name is a reference to Arabic mythology.

The artbook says, "Its head detail resembled that of a frilled lizard", which can be clearly seen in the screenshots. Its wings seem thin and leathery, like that of a bat. Its neck is very long, because "I actually wanted to do a long-necked bird-type."

Roc was fought in a desert-like landscape in an earlier version of the quadrant B3[1]. According to the artbook, "You'd shoot it down with the bow", meaning that the bow and arrow were vital to defeating this colossus, similar to Phalanx. Because Agro can be seen in several screenshots, it is likely that she was necessary for defeating Roc by chasing it, again similar to the battle with Phalanx.

Thanks to datamining, we now have a relatively solid understanding as to how the battle would play out. You would shoot Roc's frills to tuck them in; forcing him to dive at you. You'd then either jump on him from the front or climb his tail; in which he would try to roll you off him before you stab his weak point(s).

According to an old Team Ico Gamer blog post, Roc was scrapped because the battle resembled the ones with Phalanx and Avion too much and because of trouble with collision detection.[2]

Roc swooping down towards Wander in B3. 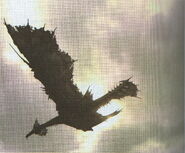 Another shot of Roc in flight. Note the pillar of light in the background.

Roc perched on a tower, resembling Avion at the start of its battle.
Add a photo to this gallery

Retrieved from "https://teamico.fandom.com/wiki/Roc?oldid=19502"
Community content is available under CC-BY-SA unless otherwise noted.