View source
watch 01:11
Tips and Tricks: How to Defeat Quadratus in 'Shadow of the Colossus'
Do you like this video?
Play Sound
Talk Page

Normal: 2 major
Hard: 3 major
Quadratus is the fan name given to the second colossus, resembling a bull and mammoth. Its lair is just north of the Shrine of Worship, underneath the great bridge at the bottom of a giant canyon.

In terms of simple distance, Quadratus' lair is the closest to the Shrine of Worship; however, getting to its lair is not as simple. Upon exiting the Shrine, holding up the Ancient Sword will reveal that the colossus is located to the north. Go around the Shrine's west side until facing a clear path north. There will be a gigantic land bridge ahead of the player that will eventually fork in two directions. Hold up the sword again for the answer: take the right fork. Once done so, a cutscene will play, indicating that Wander is close. Follow the path down to the bottom of the canyon and head northwest until facing a suspicious area of the cliffs.

Agro is with Wander this time, but her speed is not needed here. Approach the colossus on foot; once Wander is close enough, the beast will rear up on its hind legs in an attempt to crush him. This reveals the bottom of its hooves look vulnerable. Shoot any of these spots (even its back two hooves have these) to make the colossus fall down to a spot where Wander can climb up onto it.

The player's stamina has increased since the first colossus, but only marginally; don't let it run out. There are small platforms jutting out of its legs, but it's very easy to fall off of them. Head along the side of the colossus to its back, where the first major weakpoint awaits. Run up close to the center of its back if Wander is low on stamina.

The last weakpoint is on its head. It's difficult to take it out with one stamina meter; as before, retreat to its more stable back to recover if Wander's stamina becomes too low.

Image of Quadratus taken from the official artbook.

Wander facing off against Quadratus. 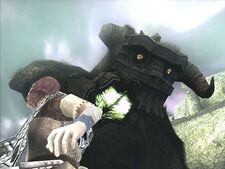 Quadratus revealing one of its weakspots on the bottom of its hoof.

Wander and Agro running from Quadratus. 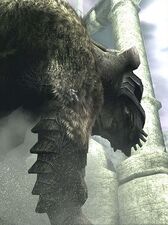 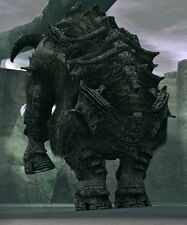 Quadratus rearing and showing its back. 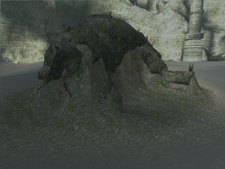 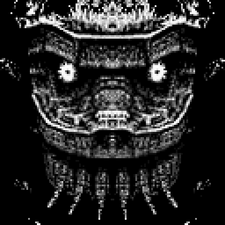 Game over screen of Quadratus.

Wander inflicting damage to Quadratus's head in the 2018 remake.

Boss A before it turned into Quadratus, as seen in the Nico DVD.

More footage of Boss A.

Footage of the horned boy climbing onto Boss A.

Clip of Wander being thrown by Boss A.

Footage of a scarier early design of Quadratus.

Footage of Wander on top of the scary early design of Quadratus. 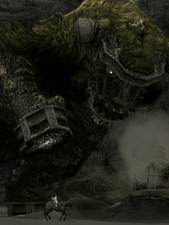 Screenshot of the scary early design of Quadratus. 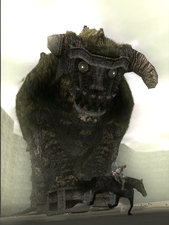 Early Quadratus as seen in the back of the box in the USA version of the game. 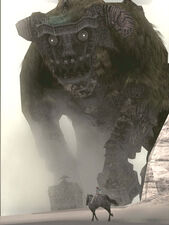 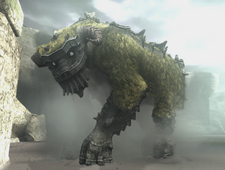 Quadratus from the E3 Demo version. Notice its greener fur.

Sketches of designs used for Quadratus. 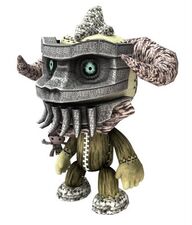 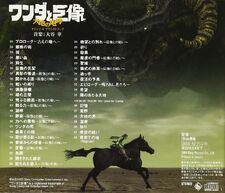 An old model of Quadratus featured on the rear face of the game's OST CD.