Yes
Phoenix is one of several unused colossi that did not make it into the final version of Shadow of the Colossus.

Phoenix's final design is smaller compared to its earlier design, but was still fairly tall. The right side of its face, its wide tail and the edges of its wings were covered in fire. Its feet had two toes on the front and one toe on the back, with ridges which looked climbable. Its legs and sides of its chest were covered in fur and were likely where Wander would first climb onto the colossus.

The guidebook gives information on how Phoenix had to be defeated: "Its body was wreathed in flame. You defeated it by plunging it into a lake".

This indicates that Wander likely needed to drop it into a lake, extinguishing the fire blocking the path to its sigil. In all released screenshots of Phoenix, Wander is seen riding Agro, so it can be assumed she was vital to this battle. As Phoenix's body isn't fully on fire and its legs had fur on them, it is possible that Wander would have to jump from Agro to one of them and climb it from there. However, it's unknown how the player would plunge it into the lake.

Phoenix was going to be battled in the quadrant I4, on the arena known as 'Crater'. It was initially speculated to be located at D3 due to the trees in the screenshots matching the trees seen at the 9th colossus' arena, but it was disproven when those trees were discovered to being labelled as "I4_tree" and "crater_branch" in the PSU Preview version. The tree texture listed in the Crater's sheets also matches perfectly with a tree seen in a Phoenix screenshot.

The cliff and floor textures seen in Phoenix's screenshots and the sheet data of the Crater matches with the ones in the J4 beta mountains. The sheets also list a water texture called "ud_wave", which suggests that Crater had water. Its presence can be linked to Phoenix's lake, as it needed to be plunged into it in its battle. 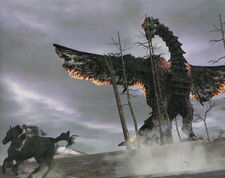 A screenshot of Phoenix. 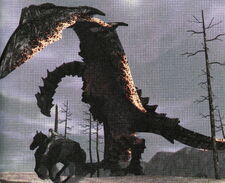 Another screenshot of Phoenix. 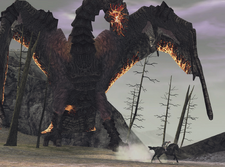 Screenshot from the Chronic'art French magazine. 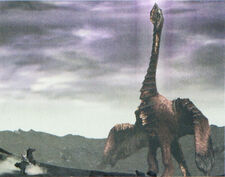 An earlier image of Wander and Agro near Phoenix. Note its longer, ostrich-like neck.

The famitsu interview showing the Bird (Phoenix) and Spider colossi. This would later be reused for the artbook, albeit without the images.

The model of Phoenix for the Tribute to Shadow of the Colossus fan game.