Normal: 3 major
Hard: 3 major
Phalanx is the fan name given to the thirteenth colossus, located in the middle of a large desert at quadrant E6. Despite its massive appearance, it is completely docile and will in no way deliberately assault Wander.

By far the largest colossus in the game, Phalanx is over twice the length of Hydrus or Dirge. To put Phalanx's sheer size into perspective, each of its wings are over 60ft long, with the rear-half of Phalanx's back matching the width of a four-lane highway.

However, despite this, Phalanx is also the most peaceful of all the colossi that Wander fights. It does not try to attack him regardless of what he does. It does not even pay him any mind unless Wander climbs onto its back.

Phalanx is located in a great desert to the southwest of the Shrine of Worship. Proceed south past the mountain where Valus dwelt until the Southern Plains have been reached. Turn west and continue until the terrain turns into a desert. Cross the platform to awaken Phalanx. Another way is that the player can proceed to the west and through the Autumn Forest to come out to the desert quicker and closer to the platform.

Unlike Avion, which keeps airborne by flapping its massive wings, Phalanx uses its small wings to merely steer itself. Its gigantic bulk is kept aloft by three series of gas bladders located at its front, middle, and posterior.

Phalanx will remain airborne, circling its desert home, until Wander brings it down. Aim the bow at one of the gas bladders and pull back until the charge meter is completely filled, which will ensure that the arrow flies faster at the target. Lead the target very slightly and release the arrow. If a sac is hit, it will deflate and turn a dim color. Once all three have been pierced, Phalanx will no longer be able to remain high in the sky and will swoop down low to the ground. Even at its slowest, Phalanx is still far too fast to reach on foot. Agro is required in order to chase it down.

Its four front wings will be lowered such that they skim the surface of the desert. Ride up next to one and jump off of Agro's back. The ridges in the wings can be climbed like a wall. Eventually, Phalanx will recover and rise back into the air so Wander can jump the gap over onto its back and then run along the length of its body until reaching a raised dorsal ridge. There are three located along its length, and there is a sigil located under each. Stab the sigil with fully-charged sword strikes.

During this time, Phalanx will try to shake the nuisance off its back. It will squirm whenever the sigil is struck, perform a barrel roll, and even dive into the desert when these two moves fail to dislodge Wander. The signal that the third is about to occur is when the flap closes down upon the sigil. When Phalanx dives into the desert sands, simply jump off to reduce the amount of damage taken.

After a moment, Phalanx will burst from the sand, its gas bladders healed. Repeat the procedure until Phalanx is brought down for good.

Image of Phalanx taken from the official artbook.

Wander on Phalanx's back mid-flight. 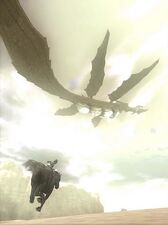 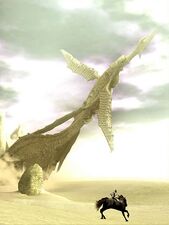 Phalanx erupting from the sand. 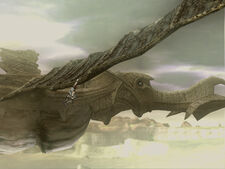 Left side of Phalanx's head. Notice the two eyes.

Wander near a major sigil; notice the flap of skin. 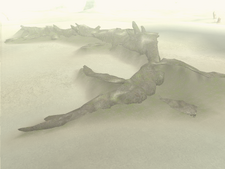 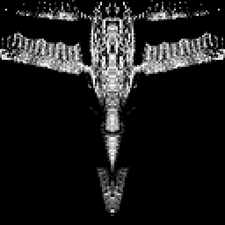 Game over screen of Phalanx.

Footage of the first model of Phalanx taken from the Production Reel featured in the Nico bonus DVD. 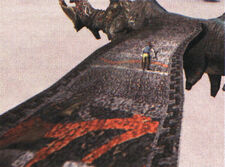 Screenshot of the second model of Phalanx taken from the artbook.

Footage of the battle against the second model of Phalanx.

Short clip of a glimpse at the third model of Phalanx. 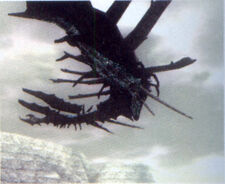 A more developed earlier model of Phalanx from the artbook. 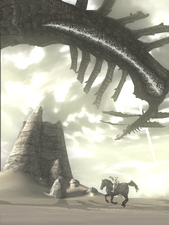 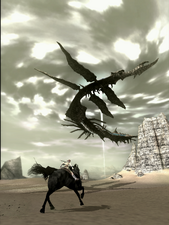 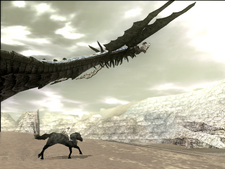 Another angle of the earlier model of Phalanx. 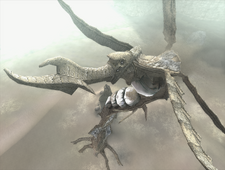 Phalanx in the E3 Demo. 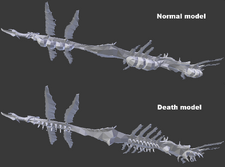 Death model of Phalanx in the E3 Demo compared with its actual model. It shows its earlier incarnation when it lacked the air sacks and had small tentacles instead. 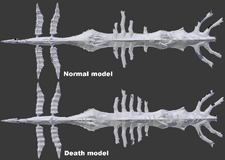 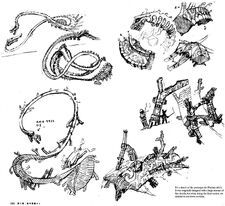 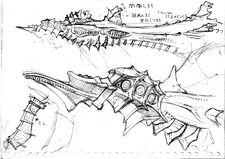