Mono (モノ Mono) is the deceased young woman whom Wander brings to the altar in the Shrine of Worship at the beginning of Shadow of the Colossus.

Mono is a beautiful woman with long, dark hair. She wears a long-sleeved, lilac dress, and no footwear. Both Wander and Mono were designed with long hair from the start of the design process. Her long, dark-brown hair worked as a contrast to Ico's Yorda, who has short, light-brown hair. At the very beginning of the game, she donned a light-brown cloak that covered her entire body.

After Wander arrives at the Shrine of Worship, he tells Dormin that she was sacrificed for she had a "cursed fate", and that he wishes for her to be revived. It agrees on the condition that he destroys the idols in the Shrine of Worship, by using the Ancient Sword to defeat defeat their sixteen colossi incarnations that inhabit the Forbidden Lands.

With each colossus slain, Mono's voice becomes more audible and clear in the visions that Wander experiences before his return to the Shrine of Worship. At one point, she is seen getting up in a dream after Wander kills the eighth colossus.

After Dormin is vanquished (likely only temporarily) and the bridge collapses, Mono finally awakens. Agro, though suffering greatly from an injured leg, leads her to the baby in the now-empty pool at the back of the shrine. Appearing dazed, albeit strangely unfazed to find herself resurrected from the dead; seemingly unshakable, she picks up the strange baby without so much as a look of surprise. They then head up to the secret garden atop the massive structure.

There, Mono and Agro are greeted by a green scenery, with water and trees providing fruits, granting a chance at life. At the end they are greeted by several animals, and the kite flies off towards the sky.

Mono's actual relation to the protagonist is never made clear, leaving it up to the player's imagination. The most accepted theory, however, is she is some form of romantic interest or partner to Wander. This is most heavily supported by one particular occasion: upon waking at the Shrine of Worship once, Wander approaches her, and a song with a notably romantic air, "Prayer", plays. During this part, he also goes to tenderly touch her face. Regardless, Mono's meaning to Wander remains a mystery.

Mono walking with Agro down the main hall of the Shrine of Worship.

With the infant Wander. 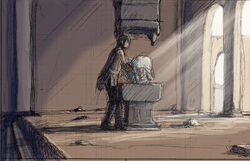 An image from the storyboard.