The sword's light will point due south, just like it did at the very beginning. The destination is much farther to the south, however. Start by going into the canyon passage just east of where the sword is pointing, as if going to Kuromori. Take a right when the path forks this time and the southern plains will be found. The sword will point to a distant mountain range - specifically, to a sealed door in the middle of the cliffs.

This door can only be opened by shining all eight beams of the sword's light on the seal in the middle of the door. For obvious reasons, the door thus cannot be opened until this point in the game. Once it opens, proceed, although it is highly recommended to visit the save shrine a short ways down the path.

Next to the shrine is a winding staircase that leads to a bridge. The walls of the mesa where Malus awaits is just ahead. However, this bridge is highly unstable and will collapse quickly if Wander sets foot on it, sending him plummeting to his death into the deep canyon below. Agro's speed is necessary to cross the bridge. Lead her up the stairs, position her as straight as possible, and charge.

A scene will play if done correctly: The bridge collapses quickly behind the pair, and it looks like they might make it across, when suddenly the final portion of the bridge gives way early. Agro, realizing she cannot make it, bucks Wander off of her to the safety of the other side, and Wander watches helplessly as his only companion throughout his entire journey falls into the river far below. Eventually, he stands up and looks up to the top of the mesa, where the wind is picking up, and storm clouds are already beginning to gather.

Start climbing the ridged walls. Maneuver up to the grass walls and climb up, then east. Once on solid ground again, find and enter the tunnel leading farther upwards.

The storm is now in full swing as the player emerges outside onto a balcony. From here, the fifteen pillars of light where each colossus once stood can be seen, as can Wander's final opponent. Head up to the top of the mesa and climb either of the two ridged pillars on the sides of the balcony. As Wander slowly emerges from the canyon, a full view of the final boss is achieved.

The last colossus is absolutely immense, even from the other side of the mesa where Wander begins. This is the only colossus that does not move, but what it lacks in mobility it makes up for in firepower. As soon as Wander walks up the steps leading to the battlefield, Malus will shoot deadly, high-speed projectiles at him from across the mesa, preventing him from approaching it directly. These make a distinct hissing sound when they are shot, but sometimes they can be hard to hear over the storm. Find cover quickly, or prepare to lose a huge amount of health.

Carefully approach the colossus using whatever cover found, and a series of underground tunnels is also helpful. Malus will know where Wander is at at all times and will shoot in his direction any time an opportunity arises. The dodge-roll move is useful here, but only to close the distance from cover to cover; the move cannot evade the projectiles on its own. Start by quickly going underground in the hole to the right; small fall damage may occur, but it's negligible compared to Malus' assault. Continue down the hallway and hug the right wall. Climb the boxes.

The next part is challenging: Wander must make his way up the ledge and behind the nearby cover without getting hit. Malus will shoot at him if he's hanging onto the ledge, but the projectile will miss. Use the opportunity to pull Wander up quickly and dive next to the wall, which should be reached right as another bolt hits. From here, make haste west from cover to cover; any mistake will knock Wander back into the trenches and damage him significantly. Health naturally regenerates slowly on its own, but if Wander crouches, it will regenerate faster. Dive into the hole at the end.

This tunnel leads out onto the western edge of the mesa, where Wander must make his way across some narrow ledges. Jumping from a ledge that divides Wander and his path is necessary. Quickly run to the next tunnel entrance. At the end is a broken staircase leading to another series of walls. These are farther apart than the previous set (and much closer to the colossus), so Wander must run from and into cover very quickly. Using the dive roll just before getting there is highly recommended.

The tunnel here will bring Wander directly underneath the colossus, and it's time to climb. The bottom half of the colossus is climbed easily enough; just go from ledge to ledge, stopping to rest when Wander needs to regain grip strength. When Wander finally reaches the colossus' midsection, however, things get tricky. The Ancient Sword will indicate a vulnerable point on the colossus' back; stab it, and Malus will try and reach its backside with its left hand. Jump from the fur on the colossus' backside to the fur on its left palm. Once accomplished, the boss will bring its hand back to where it was before, but now with the hero clinging on. Surprisingly, if Wander falls, he won't die, but rather loses a huge amount of life. Climb to the back of the colossus' hand and lightly stab it; this will make Malus hold out its hand with the palm side facing down, examining the pest.

The next goal is a minor sigil on Malus' upper left arm (again, the sword will pinpoint it). Stab this, and Malus will try and cover this with its right hand. Jump off of its left arm and onto its right hand; hurry to the back of this hand and attack it to make the enemy hold it flat. From here, shoot an arrow onto the patch of fur on its shoulder, and Malus will cover this spot with the hand the player holds onto. All that remains is the final weakpoint, which is on the very top of its head.

This is, of course, not an easy weakpoint to take out. Malus will try to shake Wander off very frequently and will often lean forward while doing so. Any slip here means a very long fall to the earth. There is only a single pause in Malus' fit where a full stab can be achieved, so don't even try until he stills (or see the final piece of tips and tricks); memorize his cycle. To make attacking this last weakpoint easier however, there is a useful trick. While on the colossus' shoulders, shoot or stab the patch of fur on its shoulder to make the colossus cover the injury with its hand again; this will leave its head perfectly still for a good few seconds. Its shoulders are a good place to recover stamina, even when the giant does everything in its power to shake Wander off.

Once the last sigil is destroyed, Malus will be no more. The final opponent defeated, Wander's goal accomplished and journey over, sit back and enjoy the ending and credits.

Image of Malus taken from the official artbook. 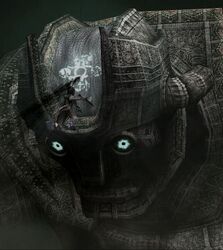 Wander on Malus' head, near its major sigil.

Wander on Malus' left arm, near one of its minor sigils.

The entrance to Malus' lair.

Idol statue of Malus (reuses the model and texture from its earlier "Buddha" incarnation). 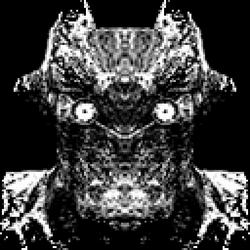 Game over screen of Malus. 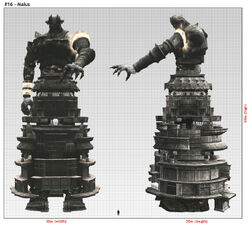 A close-up of Malus' face.

Malus trying to look at Wander.

Malus aiming his hand at Wander.

Wander standing on Malus's armor while looking into the rain.

Malus facing off with Wander.

Wander getting back up after being blown away by Malus' pulse beam. 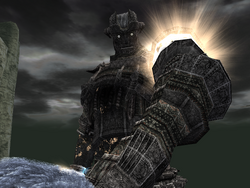 Malus in the E3 Demo. 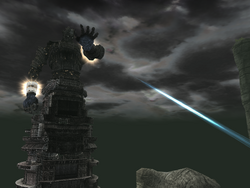 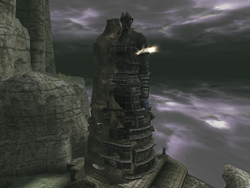 Malus before activation in the E3 Demo, with the "buddha_A_boot_body" monument beside it. 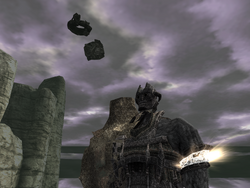 Pieces that fly off upon Malus' activation in the E3 Demo. 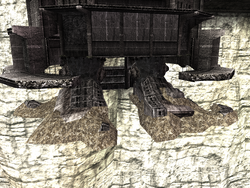 Malus' feet with a dirt-like texture just like the monument before its activation in the E3 Demo.

The limited edition figurine of Malus released exclusively in Japan.