The Magic Sigils are ornate, glowing symbols on the body of a colossus that mark their weak points. The sigils are always found on a part of the colossus that has fur. When pointed at by a fully-lit sword or when a sword is close to one, the sigil will light up. Generally, they are in a difficult-to-reach locations on the colossus' body.

There are two types of sigils: the major sigil and the minor sigil.

A major sigil, also known as vitals, is a weak point on a colossus that is used to hurt and kill it. A colossus may have more than one major sigil on its body, and each one must be damaged - by any means - and finally pierced with a sword to slay the colossus. Therefore, a colossus cannot be killed by using only non-sword weapons (e.g. Flash Arrows, Harpoon of Thunder). After a stab, a sigil may disappear, indicating that the colossus is no longer sensitive in that area and that the player must target another one.

When a major sigil is stabbed or shot, the wound sprays a black ichor that creates a dark cloud around the weak spot. The colossus will also react to a damaged sigil in a many - often aggressive - ways. They will bellow, shriek, cry, roar, howl (and more) when stabbed and often try to shake Wander off their body.

The major sigil's pattern also appears on the front and back of Wander's garb, on Mono's dress, and again on the front and back of Lord Emon's cloak. Also, the major sigils are meant to contain the essences of Dormin within the colossi. From this we can conclude that the society, from where Wander and Emon have traveled, know about the nature of the magic that allows Dormin to be kept imprisoned.

The locations of the major sigils on each colossus are shown on their respective pages. Depending on the colossus and the difficulty level, there can be up to three sigils on its body.

A minor sigil, also referred to as a wound, is a weak point on a colossus that inflicts very little damage to the colossus when struck, but is often necessary to reach one or more major sigils. There are two regular ways to trigger a minor sigil: either stab it with the sword or hit it by shooting at it with arrows. It is, however, possible to trigger minor sigils with Flash Arrows and the Harpoon of Thunder, but it requires genuine skill or a lot of luck. Minor sigils do not appear on every colossus, but rather only on a small selection. The colossi with minor sigils and their respective locations are: 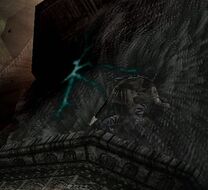 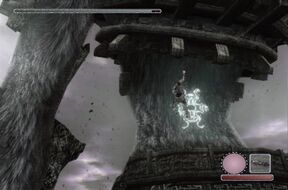 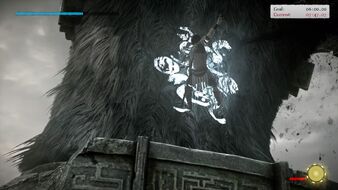 Major sigil on Gaius's abodomen as seen in the game's 2018 remake.
Add a photo to this gallery

Retrieved from "https://teamico.fandom.com/wiki/Magic_Sigil?oldid=19366"
Community content is available under CC-BY-SA unless otherwise noted.