Ico (イコ Iko, pronounced "ee-co") is the first of two young protagonists from the the PlayStation video-game of the same name.

Ico is most notably responsible for freeing a young girl named Yorda, as well as for the death of Yorda's mother, the Queen, during his captivity within The Castle in the Mist.

Although Ico’s most iconic feature are his bull’s horns, he has a few more that differentiate him from other characters, both in the story of Ico as well as in its universe. He is shorter than Yorda, with short black hair and tan skin. Ico's clothing is also unique. He wears a short red tunic, brown cummerbund, white leggings and brown sandals underneath a poncho of faded, blue-green designs. His head and forearms are bandaged. He has a pair of broken, dark blue shackles still secured to his wrists. No other character in the game bears this costume. Additionally, the character of Ico makes extensive use of wooden boards as a form of melee weapon, something that the protagonist of this game’s spiritual successor emulates briefly.

Ico is the latest victim of a mysterious curse, manifested by a pair of horns that grew from either side of his head. Subsequently, he has been blamed for any misfortune that ever befell his home village, dooming him to a life of alienation.

The game opens as Ico is being led away, hands bound, to a decaying fortress overlooking the sea. He had reached his twelfth birthday—the year of his coming-of-age—and now he must be separated from his people to die, locked away in a stone coffin with no food or drink. The people hope that the immurement of this horned boy will rid their community of trouble.

However, just as the coffin is locked up and the guards take their leave, a sizable tremor shakes Ico’s coffin from its ledge, breaking it open upon the floor. The boy is freed but left momentarily unconscious. Ico is, then, the witness of a dark vision: he looks up toward a spiked cage, hung from the ceiling of a spiraling stairway. It begins to overflow with a pool of a black, shadowy energy that drips onto the floor quite some distance below; he is simultaneously frightened and spellbound.

When he awakes, Ico makes up his mind to find a means of escape from the fortified prison. But he soon discovers that his vision was much more than a dream. Inside a cage, the same cage he saw contain the darkness, is an ethereal and delicate young girl named Yorda. She had been trapped there by her mother, seemingly, so as to prevent any resistance on the girl’s part, but for reasons currently unknown. Ico presently frees her, alerting his intentions to the minions of the castle and they are pursued, the creatures resolved to recapture the princess. As Ico slays the creatures in defense of his companion and, as Yorda utilizes her mysterious abilities to open the way forward, the children quickly realize that they need to work together if they ever wish to return freely to the outside world.

The Queen and her suboordinates eventually thwart Ico’s progress and he becomes separated from Yorda, just as their freedom had appeared certain. Ico is forced to make his way back to the surface from within the bowels of the castle. There, he acquires a special sword that allows him to unlock pathways previously only accessible by Yorda and her power.

Back at the top of the castle Ico confronts the Queen who, before engaging with him in a life-and-death duel, reveals to him that she had intended to use Yorda’s still-youthful body to extend her own aging life. Ico is victorious, saving Yorda’s existence. Nonetheless, during and after the fight he looses both of his horns and he begins to bleed out, falling victim to unconsciousness once more as the castle crumbles to pieces around his senseless body.

Ico pulls out of a long trail of dreams to find himself washed up on an unknown beach from within a wooden boat. How he got there he is uncertain, but he chooses to explore this foreign shore. Walking down the stretch of sand he discovers Yorda who also washed up here. She wakes from apparent death and the two are reunited.

Note: In the Japanese release of the game, Ico can be seen eating watermelon with Yorda along this beach if the game has already been completed once through. Fumito Ueda stated in an interview that an interpretation for this sequence was that it was all a dream that Ico had while sailing away on the boat, and not reality.[1]

Ico’s visual design as well as his role in the castle were both initially quite different than their final versions. Initially, the game’s creator, Fumito Ueda, had Ico as a servant in the castle, a position apparently occupied by normal humans at this point in the game’s development. Ico was an ordinary boy with natural human features, while Yorda was the individual intended to bear the pair of horns, which were part of a helmet that she wore.

In this early version of the game’s story, Ico encounters the imprisoned princess during his daily, menial duties and, as in the game’s final version, he decides to try and free her.

Later in this early iteration of the story, Ico was to take Yorda's horned helmet and wear it during gameplay. The horns served to visually define Ico as the playable character and differentiate him from other characters on screen. Much later down the line, the designers would re-write the story to include the horns as a significant element in both Ico’s character and in the plot as a whole. 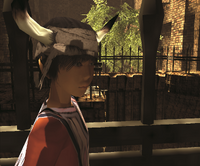 A close-up of Ico's face. 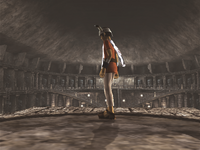 Ico standing in the starting area. 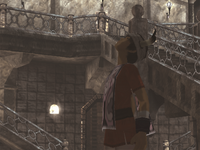 Ico just after he wakes up. 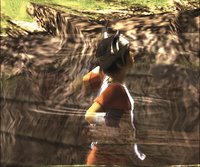 Clips showing a few animations of the early model of Ico.