View source
watch 01:37
Tips and Tricks: How to Defeat Hydrus in 'Shadow of the Colossus'
Do you like this video?
Play Sound
Talk Page

Head north from the shrine across the land bridge. From here, there are two ways of getting to the lake. The most direct path is to proceed as if traveling to Gaius, but to continue on to the Stone Arch Gorge (quadrant D2), then head north to the lake. It is easy to get lost this way, however, as there aren't too many opportunities to get help from the sword's light in the dark canyons. The easier, but slightly longer way is just to go straight north to quadrant F1, then go east through the Dried Marsh (quadrant E1). The entrance to the lake will be in plain view, and the sword can be used anytime. There is a stone path leading out to around the middle of the lake, where there will be a pillar with a spiral walkway wound around it. The player can use this walkway to reach the lake, or they could just dive in. Either way, Agro will have to watch from where she is.

Hydrus will be swimming deep underwater when Wander dives in. There is no special way of luring it up; just swim around above it and eventually it will make a pass at Wander. When it does, the player will have to grab on, but doing so isn't easy. The colossus is protected by three, giant, electric spikes protruding from its back, which activate a sphere of highly-damaging electricity when submerged. The only safe spot is the area of fur at the end of its tail.

Once Wander's been dragged through the water, the colossus will swim around at the surface of the lake, going in and out of the water to try and dislodge Wander with its electrical spikes. The sword will show the player a small place where they can stab at the base of each spike to disable them, but be very careful; this requires a near-fully charged stab at least, and the electricity will deal a massive amount of damage to Wander if he's too slow. One may not have time to disable all three spikes before Hydrus dives back underwater, which will eventually force Wander off. The colossus will soon resurface, however, and Wander doesn't have to disable any spikes he took out previously. When one finally makes their way to its head, they'll find its only major sigil. Hydrus will continuously bob its head up and down in the water, so time stabs thoughtfully, as the colossus cannot be stabbed when submerged.

Image of Hydrus taken from the official artbook. 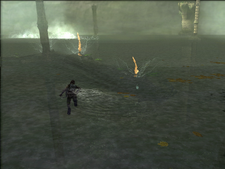 Hydrus eyeing up Wander swimming on the lake's surface. 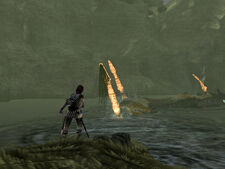 Wander atop of Hydrus.

Hydrus viewed from the side.

Hydrus viewed from below. 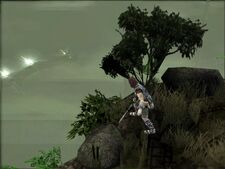 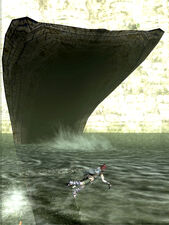 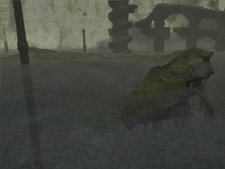 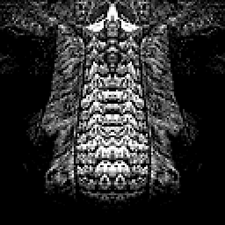 Game over screen of Hydrus.

The orange lights along Hydrus' sides were a new addition in the remake.

Hydrus' face in the remake. 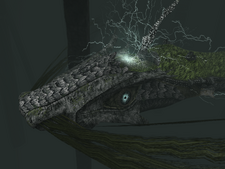 Hydrus in the E3 Demo. 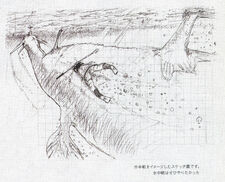 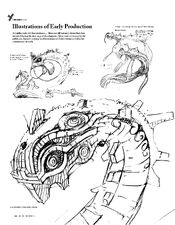 Sketches of various early designs of water based, serpentine colossi that would go on to become Hydrus.