Start a Wiki
The Hawk is one of the most common animal species in the Forbidden Lands. They fly about in most open areas. Often they will follow Wander, sometimes more than one at a time, while Wander is riding on Agro. If Wander stands still in an open area with hawks and wait, one will likely swoop down nearby. Hawks can be grabbed and ridden through the air for a short while. They can also be killed by arrows. 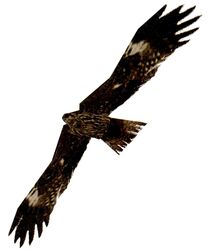 The hawks populating the Forbidden Lands have a majestic wingspan and often follow Wander and Agro on long journeys.

A hawk flying over Wander in the game's 2018 remake.
Add a photo to this gallery

Retrieved from "https://teamico.fandom.com/wiki/Hawks?oldid=19359"
Community content is available under CC-BY-SA unless otherwise noted.