1 major (back)
Griffin is one of the unused colossi that, for one reason or another, did not make it into the final released game. Its name is a reference to Greek mythology.

Griffin is a small to medium sized colossus with the appearance made to resemble its namesake, although the model shown is quite early in development and likely very unfinished. It appears to borrow different parts from its concept art while not being an exact match to any. Its body is mostly covered by stone armor while leaving its back open, which is likely where its weak point lies. Unique red markings similar to the ones from the very early design of Phalanx can be seen on its face and parts of its armor. It has bone-like wings, which are only there for decoration.

The artbook gives a relatively large amount of information on Griffin, such as, "You could defeat it by making use of its weakness, fire. You were meant to fight it by riding Agro, as with Colossus 10, but it took a long time to retry, so it was a colossus that was rejected." This could mean that it was afraid of fire, like Celosia, and swift like Dirge.

Griffin was speculated to have lived in the unused 'Valley' arena, due to the fact that Valley and Stage 7, which was Griffin's test stage, share the same textures listed in the same exact order in the game's data sheets. Its location on the map, however, is unknown; likely never making into it.

A theory placed Griffin at I7 due to a similar area being seen at the J7 beta mountains compared to the Griffin screenshots; although the areas don't match very well nor share textures. 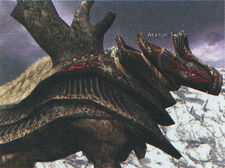 Side view of Griffin 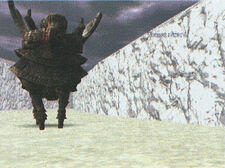 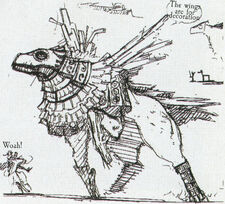 Sketch of Griffin running accompanied by a surprised Wander and Agro. Also note the size comparison on the top right. 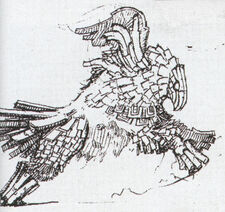 Another sketch of Griffin running. 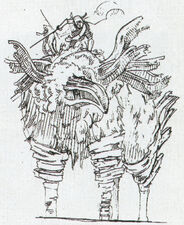 Another sketch of Griffin, now with Wander on top of it. 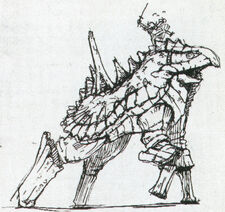 A sketch of Griffin without wings. 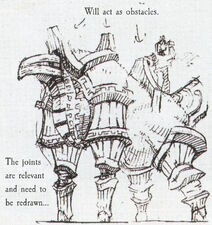 Another sketch of Griffin without wings. Wander looks quite comfortable on top of it.

A fan rendition of what Griffin may have looked like. Made for Beyond the Forbidden Lands.