Normal: 2 major
Hard: 3 major
Gaius is the fan name given to the third colossus, resembling a knight. Its lair is a tilted arena in the middle of a giant lake in quadrant E2.

Initially, the path to Gaius is the same as the path taken before for Quadratus - go around the Shrine of Worship to the right until being presented a way north, then proceed across the land bridge. This time, however, go left when the path forks; this will take the player to the northern plains. The sword will direct Wander to the northwest now. It will point roughly to a canyon entrance; this is where to go. The canyon path will eventually lead to the shores of a lake, and a cutscene will start, emphasizing the giant island in the middle of the lake and a path to take to go up. Wander must leave Agro behind here. Jump into the lake and swim to the path on the west side of the arena. This pathway will eventually end, and the player must jump to a ledge on an adjacent pillar. Grab on and go to the right. Here, Wander must leap off this ledge to reach the arena, just like what was required to reach the first colossus. Though the lake is a very long way down, Wander won't die if the maneuver is performed incorrectly, but it does takes a while to swim back. Once having jumped successfully, climb up to the top of the arena to begin.

Gaius will often attack Wander with its "sword" - a massive pillar of rock in place of a right hand - by swinging it and bringing it down to the earth with a massive crash. The obvious thing to do here is to run up the sword to start the ascent towards its major sigils, but there is a complication to this strategy: after running all the way up the sword, the way up is blocked by a great band of stone around Gaius' right wrist. To proceed, the barrier must be shattered.

In the center of the arena, there is a peculiar, shimmering plate. Prompt Gaius to swing its sword down upon this plate; once it brings its weapon down on the solid plate, the force of the impact will shatter the guard around its wrist. After this happens, Gaius will almost always perform the sword attack again; make sure Wander is not on the plate this time, as the sword will simply crash off of it. Note that if Wander is too close to Gaius, it will preform a stabbing action into the ground versus an overhead swing; it must do the latter to run up the sword so Wander can start climbing. The player may wish to get the weakpoint on its midsection before the one on the head, though it can be a trickier jump than it looks.

Image of Gaius taken from the official artbook. 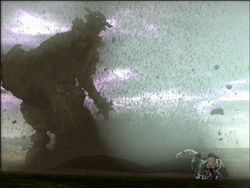 Gaius attacking Wander, kicking up a huge cloud of earth. 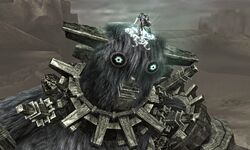 Wander on top of Gaius' head.

Gaius in the PS4 version approaches the game's hero.

Gaius readies its weapon to strike.

Wander fighting Gaius in Time Attack as seen in the game's 2018 remake.

Wander clinging to a Major Sigil.

Dormin providing Wander with a hint. 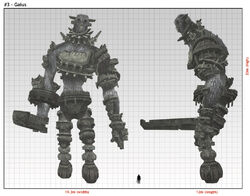 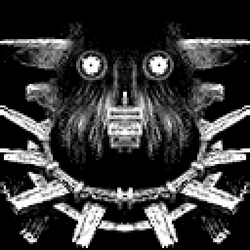 Game over screen of Gaius. 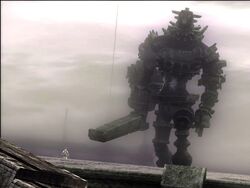 Early version of Gaius. Note the stone on top of its head, and the giant pillars in the back of its arena. 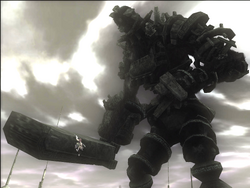 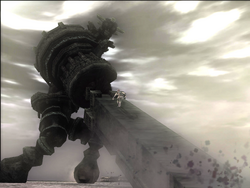 An even earlier incarnation of Gaius when it used to have a more traditional-looking sword, performing an unused sweeping attack.

Death model of Gaius from the E3 Demo compared to its actual model. It shows its earlier incarnation. 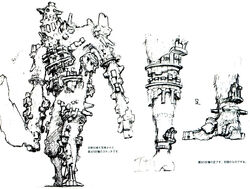 Development sketch of Gaius taken from the official artbook. 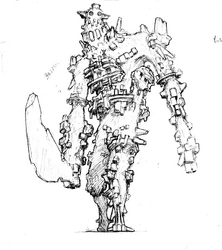 A close-up of one of the sketches. 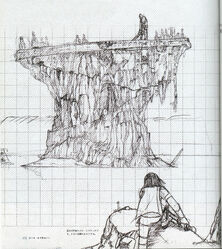 Concept sketch of Gaius' arena from a distance.