Shunpei Suzuki (sz)
Evis was the name of the previous final boss of the game before it was discarded and replaced with Buddha.

The artbook describes its sketch as "This is a sketch of when we were coming up with the last boss".

While it's not possible to determine how much progress in the programming department this colossus underwent, its unused texture segment found in the PS3 data sheets only lists two textures, meaning Evis' model was likely in a primitive state, possibly explaining why its in-game model wasn't shown off in the artbook.

Its sketch portrays the boss as a quadruped with several bone protrusions and slight humanoid proportions, however it's possible this design wasn't the final one. Using the representation of a human at the bottom of the sketch for scale, the boss was a tad higher than Quadratus.

No information on its strategy exists. The colossus was likely able to walk since a remnant of its path data is listed in the PS3 sheets and wasn't a stationary boss like Malus, but other than that nothing else is known.

Evis was planned to be located at I1, behind Argus' arena; but was likely not properly implemented in the world map due to the state of I1's model. 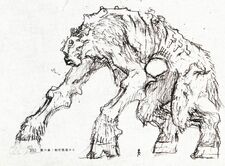 The sketch of the previous final boss.