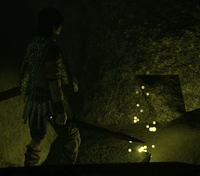 Enlightenments (aka coins, golden coins, or relics) are a collectible item added in with the Shadow of the Colossus remaster for the PS4. These enlightenments are scattered throughout the world in often hard-to-reach places. The relics sparkle when found, and a count can then be found in the lower left corner of the map in the clouds. When nearby a coin, a sound can be heard as well, assisting the player with honing in on exactly where it is.

Once they are all gathered, players can proceed to the Shrine of Worship and unlock a previously sealed door. Within, they will find the Sword of Dormin.

Below is a video showing all the locations of the golden coins in Shadow of the Colossus, put together by PS4Trophies. Below the map are timestamps of all the coins in the video, as well as the map location.

The enlightenments are an homage to Nomad Colossus, a well-known member of the Shadow of the Colossus community. He is a prominent blogger and YouTuber that serves as a source of information for all things relating to the original and now remastered version of the game.

Clues to their existence were first found within the game's credits: "Nomad Colossus and the 79 steps to enlightenment", prompting players to dub these coins "enlightenments".

Retrieved from "https://teamico.fandom.com/wiki/Enlightenment?oldid=17217"
Community content is available under CC-BY-SA unless otherwise noted.