Dune is the developer name given to the unused arena of Worm, one of the unused colossi.

Dune's textures and name indicates that it was a desert that featured one or more dunes likely set inside a giant sand pit. A separate texture segment for a place likely related to Dune named "dune_par_erea_gate" includes a texture named "taimatsu" which translates to "fire pillar" (this texture is also in Valley).

"Gate" areas typically do not indicate that such areas have a literal gate, but rather a separate model of a path leading to the arena. Examples of this include the passages to Kuromori's Underground arena and the inner area of Argus' Parthenon with the fallen pillar, which is named "parthenon_area_gate", so it can be presumed that Dune once had some similar variation of a pathway.

Dune was placed in an early version of quadrant 'G1', before it was inhabited by Argus in its Parthenon, as they were located in 'H1'.

An old ambient texture of 'G2' (Poseidon's Lake) found in earlier versions of the game shows an extension of the desert connecting to 'F2', 'F1' and 'G1'; with what appears to be a border of a sand pit that extended further into 'G1'. No feature like this exists in any actual model from the versions available, and it can be assumed that the texture is from much earlier in development. Huge dunes can be seen in G1, making a circle around a Save Shrine. This could be a memento of the time when Worm lived in the quadrant which now houses Argus, but the overall shape of it was not likely to have been the same. The chip data of Dune reveals that the area was much larger, making it possible that the dunes also were. 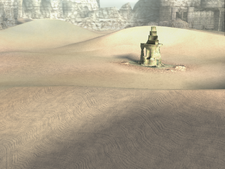 Dunes in G1 from the final game. 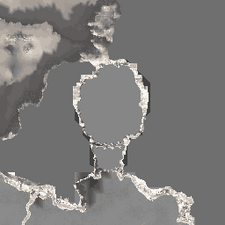 Early ambient texture of G2 from the PSU Preview and E3 Demo versions of the game showing an earlier version of the G2 quadrant from above.