The Ico & Shadow of Colossus Collection

Dormin (Japanese: ドルミン Dorumin) is the mysterious entity residing in the Forbidden Lands and an ambiguously-motivated pseudo-antagonist of Shadow of the Colossus. Dormin communicates with Wander both through a large sunlit aperture in the ceiling of the Shrine of Worship and during colossus battles will provide Wander with occasional hints if he is having difficulty.

After Wander lays Mono down on the altar and vanquished several shadow creatures, Dormin reveals itself to him, apparently surprised by the fact that Wander possesses the Ancient Sword. After learning that Wander wishes to revive Mono, Dormin states that it is possible with the use of his sword by destroying the idols that stand in the Shrine of Worship. However, they can only be destroyed by slaying their incarnations, the colossi. Dormin also warns Wander that the price of reviving Mono may be heavy. After Wander comments that it doesn't matter, they make a deal: he slays the sixteen colossi and Mono will be resurrected.

Each time a colossus is killed, several black tendrils come from the fatal wound and embed themselves in Wander's body. It soon becomes clear that these tendrils are the once-separated fragments of Dormin, quarantined inside each of the sixteen colossi.

After defeating the sixteenth colossus, Wander is transported back to the Shrine for the last time. There, Lord Emon and his men have already arrived, shocked to find that the ritual is nearly completed. After Lord Emon's men shoot Wander in his leg and stab him in the chest with a sword, the sixteen pieces of Dormin combine in Wander's lifeless body and Dormin reforms as a shadowy being as large as many of the colossi. It is revealed that Lord Emon's ancestors severed Dormin's body in sixteen segments for "an eternity" in order to to seal away its power.

After Dormin tells Lord Emon that it "borrowed" Wander's body, it terrorizes him and his men in the main hall of the Shrine as they make their escape to the back of the shrine. Dormin attempts to follow them, but is slowed down due to Wander's injured leg. Upon reaching the top of the spiral staircase, Emon says an incantation and throws the Ancient Sword into the shallow pool. A whirlwind is created and the essence of Dormin is slowly stripped away until all that remains is Wander's figure, completely covered in shadow, which is presently sucked in as well. The only remnant of Dormin or Wander is a mysterious infant bearing two stubby horns on its head, which is discovered by a resurrected Mono shortly after Emon's men flee the Lands. Whether Dormin is banished for good or only temporary is up for debate.

Voiced by Kazuhiro Nakata and Kyōko Hikami, Dormin speaks with both a male and female voice in loose synchronization. Because of this, fans have often debated over the correct pronoun to use. The plural pronouns "they" and "them" are often used because of Dormin's dual voices. Lord Emon notably refers to Dormin using the masculine pronoun "he" in the final scenes, though Dormin uses the plural "we".

Origin of given nameEdit

The large sunlit aperture through which Dormin speaks to Wander.

An image of Dormin inside the Shrine of Worship. 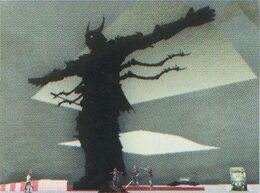 An old character model of Dormin.
Add a photo to this gallery

Retrieved from "https://teamico.fandom.com/wiki/Dormin?oldid=18355"
Community content is available under CC-BY-SA unless otherwise noted.