Normal: 2 major
Hard: 2 major
Dirge is the fan name given to the tenth colossus. This serpentine colossus moves through the loose sand in a gigantic cave in quadrant B4 of the Forbidden Lands.

Dirge is directly west of the Shrine of Worship. Travel across the west land bridge in quadrant F4 and across the Western Plain, staying near the cliffs. Use the sword when the terrain gets rougher; the player should end up on the north end of Dirge's cave. There is a place to save here if needed (for newcomers, it is advised, as this fight can prove challenging). Proceed into the cave, following the tunnels west. There is a large sand-filled room, and upon approaching the light in the middle of the room, Dirge's cutscene will play.

Agro is with Wander again, and she's even more crucial to this battle than the last. Dirge moves very quickly through the sand and can deliver a massive attack with its mouth if it catches up to Wander. If he is ever knocked off Agro, get back on as quickly as possible.

The method of defeating this colossus is tricky to execute. Dirge will chase Wander when he's riding around the arena on Agro; when it gets close enough, it will raise its gigantic eyes out of the sands right before it delivers the attack mentioned previously (if it does, quickly swerve to the left or right). The player must shoot one of its eyes before it has a chance to do so. Should one fail and be hit with Dirge's jump attack, they will take an extreme amount of damage, coming close to death. In this case, go to one of the big pillars, stand off of the sand, and recuperate health by crouching.

). While these buttons are both held down, the player should be able to shoot one of Dirge's eyes with a little practice. Let Agro do the steering, and focus on aiming at one of the eyes. A direct hit will send the colossus into the nearest wall or pillar, exposing a climbable section of its back containing its two weakpoints. The player should be able to take one out completely before the colossus is able to dislodge itself. Repeat the process once more for the second weak spot.

Image of Dirge taken from the official artbook. 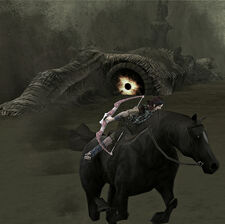 Dirge in pursuit of Wander.

Dirge stunned after hitting a wall. 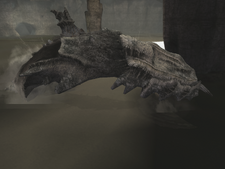 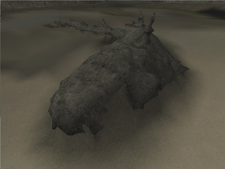 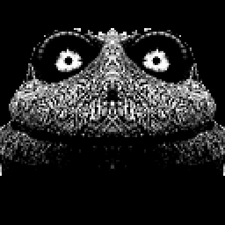 Game over screen of Dirge. 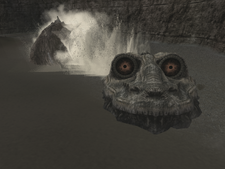 Dirge in the E3 Demo. Note that it didn't have mandibles and its body came out more often from the sand. 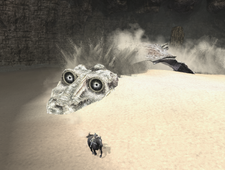 Dirge in the E3 Demo chasing Wander and Agro.

Shadow model of Dirge in the Preview and earlier versions. It shows the early version of Dirge seen in sketches. 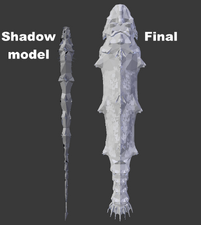 Comparison of the early model of Dirge with the final model.

Early sketches of "Snake II", which were used for Dirge.

Sketch of an earlier design of Dirge from the Shadow of the Colossus Official Strategy Guide by Bradygames. 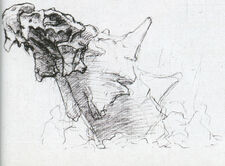 Sketch of the head from an earlier design of Dirge.

Sketch of Dirge close to its finalized design. 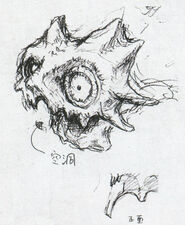 Sketch of the eyes from the finalized design of Dirge. 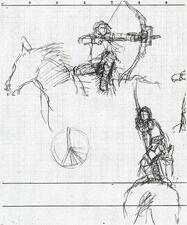