Devil's Plain is the developer name given to the unused arena of Devil, one of the unused colossi. The picture shows the vacant area in D2 where the arena once resided.

It's unclear how the general shape of the arena looked like. What is known is that it was set somewhere high-up near the D2 archway, at the top of a cliff or structure. Several pillars of different kinds and sizes existed throughout the arena, some of them broken.

The arena was located on the northwest side of the Forbidden Lands, next to Stone Arch Gorge, at quadrant D2. In the final game, this area is now empty with no purpose except for connecting surrounding quadrants.[1]

It was previously speculated to have been located at H2, next to the Beta Dam, but was debunked when new evidence from the PS3 data sheets was discovered, including D2's and Devil's Plain's chip data and textures, both of which matched greatly. 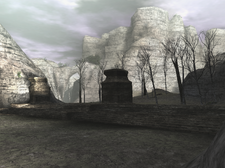 The possible entrance to Devil's Plain; still remains in the final game. 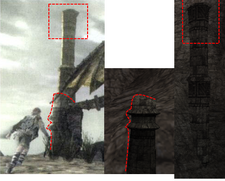 Comparison of Devil's pillars with the ones near Cenobia. 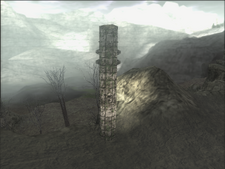 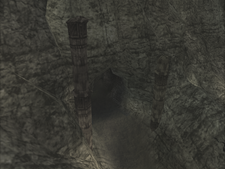 Taller pillars, now aligned at the entrance to the cave leading to the Ruins. 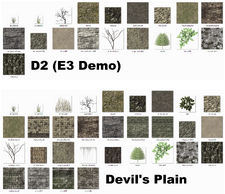 Comparison between the textures listed in D2 (E3 Demo) and Devil's Plain.

The chip data of Devil's Plain and the final version of D2.