Crater is the developer name given to the unused arena of Phoenix, one of the unused colossi.

The battle was likely to be set on a volcanic crater, with one or more lakes throughout it.

The later version of the arena featured a dry environment, with a volcanic rock texture listed in its texture segment and dead trees placed throughout. The only remains of this arena are the mountains in J4, which suggests that the Crater was very large, with its borders being outside of the main quadrant.

The earlier version of the arena (the one from the screenshot with the larger Phoenix) featured a more volcano-like appearance, with every single texture from it (Stage 8) being volcanic, as opposed to the later version only having one.

The available evidence points to the arena being located on the east side of the Forbidden Lands, at quadrant I4.

Crater was previously speculated to have originally been located at Quadrant D3, the location of Basaran in the Final version; due to the presence of matching trees in both arenas. Additionally; in the first public 'OPM Demo' map a copy of Avion's icon was used in place of Basaran, suggesting the presence of another 'bird' at Geyser.

Both ideas would later be discredited; the first when said trees were found to had materials that included "I4" in their name, which could indicate a potential location prior to being moved, and the duplicate Avion icon explained by users Nomad Colossus and Wisi as a leftover from an older order in which the Colossi were fought.[1]

The J4 mountains appear to be a partial remnant of the arena, sharing many of the same unique textures listed only in Crater. 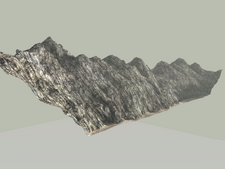 The J4 mountains, a part of the Crater that was left in the game after I4 was nulled. 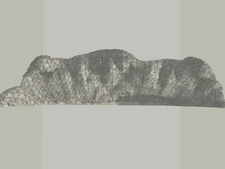 Top view of the J4 mountains. 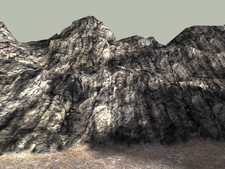 Close-up of the J4 mountains and its remnant of a ground. 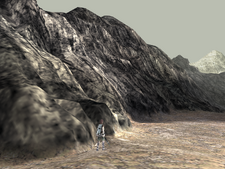 Wander on the J4 mountains. 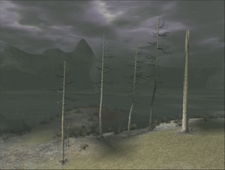 The trees originally from Crater, now in Basaran's arena. 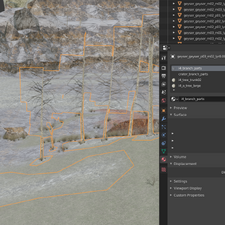 Screenshot of Basaran's arena from the PSU Preview version, showing the I4 and crater trees.

Textures of the Crater.

Textures of the J4 mountains. All three of them are also listed in Crater.

Textures of Phoenix's test area - Stage 08. They no longer exist.