The Cloth of Desperation is essentially a parachute and it is gained after defeating fourteen colossi in Hard Time Attack mode. While equipped, jump and press either

This item is useful if knocked off of a tall colossus or to quickly jump down from high elevations, as it reduces fall speed and thus nullifies fall damage. While falling, Wander has very little control over the direction in which he falls when the Cloth of Desperation is in use, but it does have a slight forward motion. It can be equipped at the same time as the Shaman's Cloak.

As of the 2018 game, the Cloth of Desperation can be toggled without mutual exclusivity against the use of any other item. It also has an additional use as a tool to aid reaching several Enlightenment spots that might require unconventional tricks such as leaping off a Colossus to get to a high platform that's seemingly inaccessible from ground level. 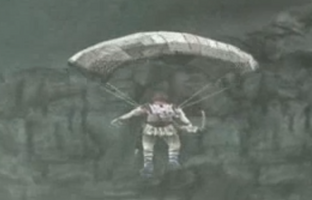 Wander using the Cloth of Desperation 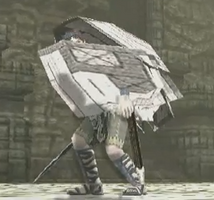 Wander looking like a clam as the result of the Clam Shell Glitch.

Community content is available under CC-BY-SA unless otherwise noted.