The Cloak of Force is an item unlocked by defeating four colossi in Time Attack on Normal difficulty in Shadow of the Colossus. If worn by Wander, it increases the amount of damage he deals with the Ancient Sword. The effect stacks with both the Mask of Power and the Mask of Strength.

Unlike Wander's regular cloak and the Shaman's Cloak, the Cloak of Force does not feature the major sigil symbol. The cloak is identical to the ones that two of Lord Emon's men wear. 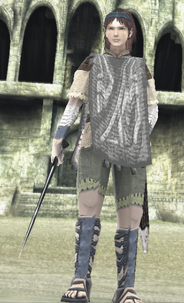 Wander wearing the Cloak of Force. 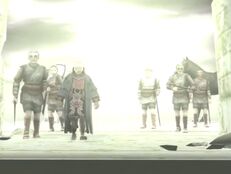 Lord Emon and his men entering the Shrine of Worship. Note that the first man on the left and the second man on the right wear cloaks similar to the Cloak of Force.
Add a photo to this gallery

Retrieved from "https://teamico.fandom.com/wiki/Cloak_of_Force?oldid=19335"
Community content is available under CC-BY-SA unless otherwise noted.