Start a Wiki
The Cloak of Deception allows Wander to become completely invisible. It is unlocked by defeating fourteen colossi in Normal Time Attack mode.

As stated above, wearing the Cloak of Deception renders the player completely invisible. While invisible, a colossus will not be able to attack Wander, but if he shoots at one with his bow & arrow, it may realize where he is and look (in Malus' case, aim) at him. If Wander starts climbing a colossus, it will instantly realize it and start trying to shake him off.

Even to the player, Wander is invisible with this cloak. The only thing the Cloak does not hide is his shadow, which allows the player some idea of where Wander actually is. Also, the Cloak of Deception cannot be used in conjunction with the Cloak of Force. 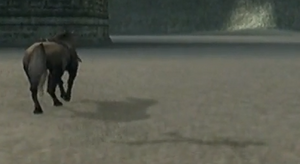 Wander wearing the Cloak of Deception. Note that his shadow is still visible.
Add a photo to this gallery

Retrieved from "https://teamico.fandom.com/wiki/Cloak_of_Deception?oldid=17788"
Community content is available under CC-BY-SA unless otherwise noted.