Cenobia is the fan name given to the fourteenth colossus, found in the ruins of a large city in quadrant C2 of the Forbidden Lands. It is similar in size to the equally relatively-small colossus Celosia.

The ancient city is northwest of the Shrine of Worship, and there are a few ways to get there, but the quickest way is through the gorge at D2. Cross either the north or west land bridges in quadrant F4 and let the Ancient Sword point northwest. Check the map once in the narrow passages to make sure Wander is headed in the right direction. Once at the northwest area of the Forbidden Lands, be on the lookout for a path marked by many sets of small pillars on either side. This is the entrance to the city. Unfortunately, the connecting passage contains a body of water that Agro cannot pass through. A cutscene will play as the player enters the city on its eastern side. The colossus sits atop a temple to the southwest (shown at the very end of the scene), but take some time to explore the environment first if one is new - the upcoming battle will cover nearly every ledge, bridge, column, and tower. Approach the colossus' temple in the western end of the city to begin. As with Celosia, be ready to run for cover the second the fight starts.

The colossus is fully-armored, and there doesn't appear to be a clear method to expose any fur. The goal for now, however, is to simply get away and find high ground. Cenobia is extremely aggressive and will ram the bottom of whatever structure Wander happens to be on in an attempt to dislodge him. When the battle begins, quickly get on top of the overturned pillar to the left. At the other end of the pillar, there's a ledge Wander can jump onto. Jump up and run across to the next walkway, and the next. After this, the player will have to climb a ridged pillar. (A jump charged at least halfway will let Wander skip a ridge, but don't tire him out.) At first, it seems like there's nowhere to go after this. Notice, however, that the pillar Wander is on looks a lot like the fallen one he jumped on a minute ago. The colossus needs to knock the pillar down, but its constant ramming attacks aren't quite strong enough. The solution is simple: Anger it by shooting it with an arrow or two (use the "look at the colossus" button -

by default - to help with aiming). The next time it attacks the pillar, its base will give way and a cutscene will show the pillar falling down. Be extremely careful not to fall off here. This first column is particularly dangerous, as the top of the pillar falls right over a deep canal. Falling in there means the player has got a long and very dangerous run back to the first pillar. To avoid falling, hang off the edge of the pillar that will face up when it hits the ground.

Following the walkways from here will bring the player to a series of pillars. Continue provoking the colossus from atop the columns until a ridged tower has been reached, which should also be climbed. For this structure, Wander will need to move alongside one of the ledges to get to a side where he can reach the top. Don't shoot at the colossus from this tower; jump onto another pillar just to the south and shoot a few arrows at it from there. Once this tower breaks, a cutscene will play showing it smashing into a wall near where Wander first entered the city.

The next part is tricky. The player has to get on the "roof" above them, and the only way up is a ridged wall on the other side of the room Wander just crashed into. Wait for the colossus to get as far away as possible, then make a run for it. Notice that the door arch here is too narrow for the colossus to pass, and it has to go around the whole area to the other side of the arch; use this to lure it away and buy some valuable time. Once on top of the roof, shoot at Cenobia again. The colossus will run into the central pillar holding the roof up, and everything will come crashing down, breaking the colossus' back armor and severely damaging the armor protecting its head. This will also reveal the major sigil on its back. The next time the colossus rams something, the shock of the impact will stun it for several seconds, allowing Wander to stab its weakpoint a few times. Be careful when the stun wears off, as the colossus will continue its vicious attacks to the last.

Image of Cenobia taken from the official artbook. 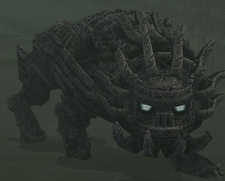 A shot of Cenobia head-on.

Cenobia viewed from a height. 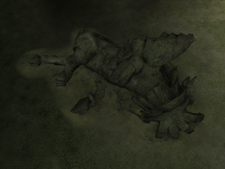 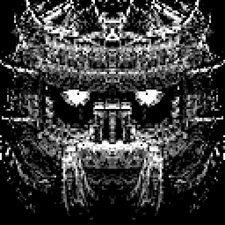 Game over screen of Cenobia.

Cenobia at its perch before the battle.

Wander clinging to a tower above Cenobia.

Cenobia prepared to collapse in defeat. 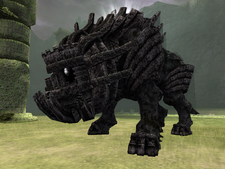 Cenobia in the E3 Demo. 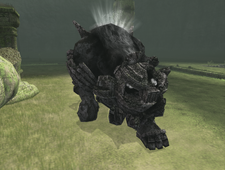 Cenobia with its armor broken in the E3 Demo. Note the lightning effect on its back.

Observing the eyes move with a static camera.

Comparison between the final (left) and E3 Demo (right) models of the 14th Colossus. 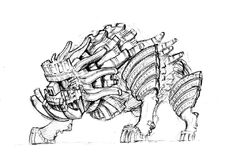 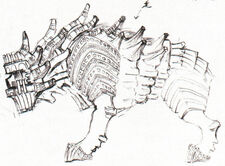 Sketch of Cenobia with its armor broken. 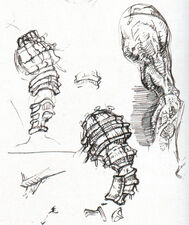 The limited edition figurine of Cenobia released exclusively in Japan.