Normal: 1 major
Hard: 1 major
Celosia is the fan name given to the eleventh colossus, found in a small but deep canyon underneath the north end of the gigantic bridge at quadrant F1.

The canyon where Celosia dwells is at the north end of the enormous bridge. Head north from the Shrine of Worship and follow the bridge north until the canyon has been reached. To get to the bottom of the canyon, take the winding slope on the canyon's eastern rim, jump into the small pond below (be sure to aim for a deep spot), or use the Cloth of Desperation on Hard. Once at the bottom, head west across (or around) the shallow lake. The temple to the west is the destination; the player can enter through a side passage to the right. After turning left and entering the temple, climb up some ledges to the right and jump across the gap to begin the battle. Try and jump as close as possible towards either of the walls.

After ten battles against enormous (and mostly slow) colossi, Wander now faces a colossus with the size and speed of a modern tank. Celosia will charge at Wander right from the start, so run for cover. There are four braziers set into the walls with gaps just big enough to dive into, so run here; at the very back, Celosia cannot reach Wander, despite it trying to claw at him. Climb to the top of a brazier and Celosia will ready a heavy charging attack to try and knock the player down to where they're vulnerable. This attack, however, will dislodge a burning torch from the fires. Pick it up right away (with O or

in the original or PS3 port, or

on PS4), as Celosia is incredibly aggressive and will attack without hesitation. Climb back up the brazier, and press O with the stick equipped next to the flame to make Wander light the stick on fire or strike the flame with the stick to light it.

Here, Celosia displays a fortunate weakness: It is afraid of fire and will back away fearfully from the burning torch if Wander carries it towards the colossus. The goal is to force it off the eastern ledge and into the canyon below. However, it's not as simple as that. To do this correctly, the player has to be within a certain distance for the colossus to be scared and back off; if they get too close, Celosia will attack with a quick swipe of its claws. Additionally, there is a limited time of 45 seconds before the torch burns out entirely, which causes the colossus to immediately charge again, forcing the player to repeat the process of lighting the torch. A good strategy is to walk slowly toward it, but keeping out of the reach of its claws. Wander can even strike it on the face with the stick.

After forcing Celosia off the ledge, a cutscene will play - the colossus will fall off the ledge a long way to the canyon floor, shattering its armor on impact. This exposes a patch of fur on its back and its weakspot. From this point, Wander has two main options:

Finally, the player can use the braziers to jump onto the colossus, deal some damage and defeat it.

Image of Celosia taken from the official artbook. 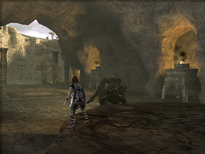 Celosia in its cave. 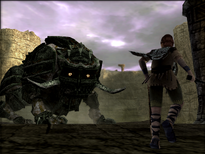 Wander squaring up against Celosia. 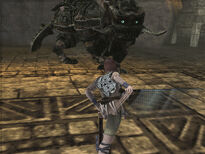 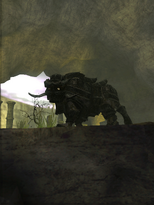 Looking down from the edge.

Celosia falling off the ledge.

Another shot of Wander facing Celosia. 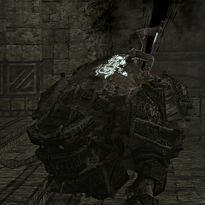 Celosia collapses in defeat. Note how its eyes have gone black. 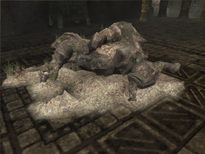 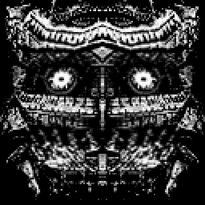 Game over screen of Celosia.

Celosia preparing to leap into the battle.

Celosia with its back armor broken off in the PS4 remake.

Early development clip of Celosia from the Nico bonus DVD. 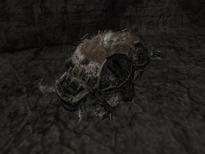 Celosia after breaking its armor in the E3 Demo. Note the lightning effect on its back.

Death model of Celosia from the E3 Demo compared to its actual model. It shows an earlier incarnation of it with bigger horns.

Early designs of Celosia, its back was exposed and both designs had very different heads.

More advanced early design of Celosia. Now with armor, albeit unlike the one in the final version. Its tusks were also much larger, with spikes on them. 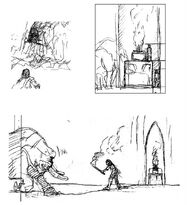 Concept art of the battle. 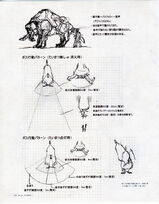 Development sketch of Celosia taken from the official artbook. 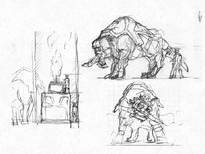 Sketches of Celosia from the Nico bonus DVD. 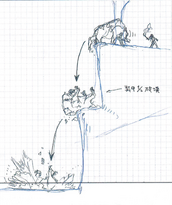 Development sketch of Celosia falling into the lake. Year of creation: 2003~2004.