The Bow and Arrow is the first ranged weapon that Wander can use in his hunt for the colossi. It is in Wander's possession from the beginning of the game. It can and sometimes must be used while riding on Agro's back.

The bow has an unlimited amount of arrows, but it is not an effective weapon for killing the colossi. The amount of damage done is negligible, and the major sigils of a colossus must be stabbed with a sword for it to die.

Arrows are, however, useful in getting the attention of a colossus and for triggering certain weak spots. For example, in the fight against Cenobia, using the arrows to get its attention is absolutely necessary. In the fight against Quadratus, Wander must shoot one of the weak spots, located under the hooves, in order to climb it. While a player can get by decently with modest bow skills in Normal Mode, it is a necessity to aim fast and accurate for Time Attack and Hard Mode.

Arrows are not only useful for fighting the colossi, but are also needed for collecting fruit or lizard tails. The player can can look around easier while aiming the bow, instead of using the in-game camera. Another use is testing whether or not a certain area is solid and climbable.

The bow seems to be made from some sort of pink wood and has around four strings in front of the handle, which the arrow goes through, to enhance accuracy. It has a long, silvery string that shines very brightly and is very durable.

Colossi that require the Bow and Arrow to defeat

2. Quadratus - To shoot the bottoms of the hooves.
5. Avion - In order to get its attention while it is sitting at its perch and initiate the fight.
8. Kuromori - When it is climbing a wall, its legs must be shot.
9. Basaran - Its feet must be shot when it is unbalanced over a geyser.
10. Dirge - Arrow must be fired at its eyes when it is chasing Wander.
13. Phalanx - All three of its gas bladders must be shot for it to come closer to the ground.
14. Cenobia - Wander must shoot arrows at Cenobia to make it knock over the pillars he is standing on.
16. Malus - The player must fire at its left shoulder when standing on its right hand.

Wander using the bow to attract a colossus' attention. 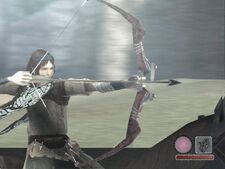 Wander drawing his bow within the Shrine of Worship.