Barba is the fan name given to the sixth colossus. This bearded giant is found in a remote temple in quadrant D6 of the Forbidden Lands.

The path to this colossus is easily the most involved and complex one yet. There are several ways to get there, but the most direct path is through the Autumn Forest. Finding the forest is easy enough - the sword's light will direct the player there from the Shrine of Worship - but finding a way out of the woods can be tricky. The northwestern corner of the woods is where to head; there, there is a path leading out into the sunlight of the Blasted Lands. Refer to the video if having trouble locating the exit. The sword will direct the player south now. The temple where Barba resides is past the Blasted Lands' save shrine. Agro cannot follow Wander into the temple, as he must climb several obstacles in the ruined halls that she cannot get past. Proceed into the main hall of the temple and a cutscene will play. Find a safe way down to the floor now. Head straight forward to the edge of the floor and look at the wall below; Wander can climb down the ridges (the player can also survive jumping at this height, but there is a considerable health loss). Once he's reached the bottom, the ground shakes, and the wall disappears into the ground.

Barba will be right next to Wander as the battle begins (unless another way down was taken), but it is not likely aware of him yet. Take the advantage and get a head start. The goal is to reach the far end of the temple hall. Three walls stand in Wander's way, and he must climb them quickly; the colossus will follow him and smash them apart as it walks through them (a cutscene will play the first time it does this).

Once at the far end, seek cover in the small alcove built into the wall, and get out of sight behind a pillar. Get Barba's attention if necessary (whistling is recommended, as the player can remain hidden), and eventually Barba will look for Wander by putting its left hand down on the ground and lowering its beard. Jump out of hiding quickly and onto the beard (Hard Mode players will want to go for the hand as well). Barba has a weakspot on its lower left back as well as its head. It will try to throw Wander off plenty of times when going for the head, but the spot on its back is even more dangerous, as it's harder to get to a place where stamina can be recovered.

Image of Barba taken from the official artbook. 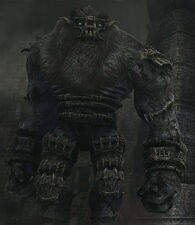 Barba viewed from the front.

Barba peering into the ruins, searching for Wander.

Wander and Barba. Notice how the major sigil sits more on the left of its head. 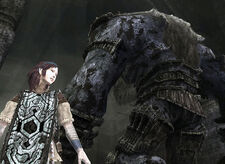 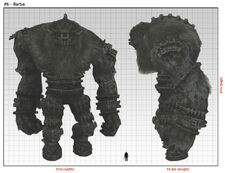 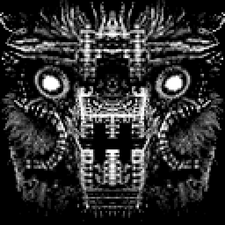 Game over screen of Barba. 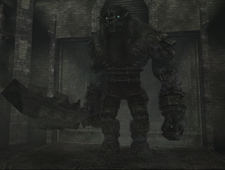 Barba in the E3 Demo.

Barba exiting its cage in the E3 Demo 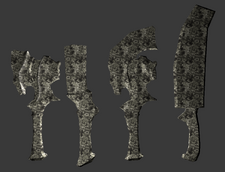 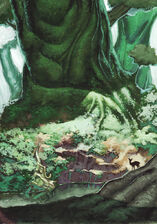 Unlockable Shadow of the Colossus costume from Ghost of Tsushima. The mask is Barba's head.