Badlands is the developer name given to the unused arena of Roc, one of the unused colossi.

A desert-like landscape with a huge impact crater on its center. It is filled with various types of ruins, including a massive pillar which the colossus rested on.

The arena was located on the southwest of the Forbidden Lands, next to the Blasted Lands, at quadrant D6.[1]

It was previously speculated to have been located at B3 due to a seemingly similar shaped area being seen in an old low resolution texture, but it was debunked when several pieces of evidence, one of them being Roc's pillar, were found that linked Badlands and D6 together. 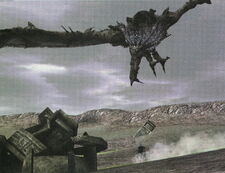 Screenshot of the battle from the artbook.

Footage of Roc's pillar. Notice the base of it, showing spaces big enough for Wander to fit through. 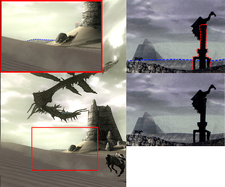 The pillar behind the rock that was first noticed by JK in Phalanx's screenshots, compared to a picture of Roc. 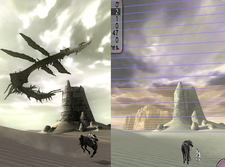 Comparing the picture with the in-game location, the only thing missing is Barba's mountains. Done by Wisi.

Making a makeshift pillar, deleting Barba's mountains, and placing it inside it while standing in the direction of the screenshots, reveals a perfect match.

Comparing the previous image with the original shows the match especially well.

Changing the picture's saturation enough to show its background in a clearer way, reveals that the mountains in the background are the same as the mountains to the east of Phalanx's desert; even the scattered mountain-like rocks match.

Textures of the Badlands.