Argus is the fan name given to the fifteenth colossus. This cleaver-wielding giant is found in a fortress in quadrant G1 of the Forbidden Lands.

Getting to Argus can be tricky for first-timers; if they follow the sword's light directly, they will go east around the shrine and will be led straight into the forest they took to get to the top of the waterfalls where Pelagia once dwelled. A better way is to go west around the shrine, take the north land bridge, and head alongside the giant bridge as if going to Celosia. From here, the sword's light will be much more helpful in getting the player to the fortress. Head inside the ruins. Wander can ride Agro inside, but a giant fallen pillar will block her from coming with him. Climb up and around the pillar, and continue down the hall and up the steps to enter the main area of the fortress. The area is unexpectedly empty. The sword will direct the player towards the valley at the east end of the arena, and as Wander approaches the edge, the earth shakes, and two enormous hands appear before the colossus pulls itself up the cliff wall.

The battle begins right next to the colossus, much like with Barba. Unlike that fight, however, this colossus is very well aware of Wander's presence. The first thing he needs to do is run back to the western side of the arena and onto the slightly-raised platforms at the northern or southern edges once he's there. Argus will stomp these platforms to attack the player; this will tilt them slightly upwards toward the walls for a short while. Quickly get on this raised platform and jump; Wander can now make it slightly higher up the fortress.

If Wander was in the right place when Argus stomped the platform, he should now be able to take a small set of stairs to a long, narrow hallway. Notice the fallen rock here. To get higher up, shoot the colossus with some arrows until it attacks the walls with its cleaver. This will dislodge some more rocks; get on top of them and jump to some ridges. Climb them, and Wander will finally be on top of the arena.

There are two giant bridges that span the sides of the arena. Watch out, however - Argus can and will easily destroy both of them, so don't try crossing. Only one is required to be destroyed; the broken ends of the bridges will be Wander's best shot at jumping onto the colossus. Shoot some arrows for provocation if necessary. Stay towards the end of the bridge or run back after provoking Argus to prevent falling and having to start from the bottom again.

Argus has a weakpoint on its head; be prepared for some heavy thrashing and have as full a stamina meter as possible before attacking it. Hard Mode players have a weakpoint on the left side of its upper chest to deal with as well. This can be a very difficult weakpoint to take care of, because the slightest movement on Argus' part (and there will be a lot) will cancel a stab as it charges. For this reason, it can also be difficult to get back up to a place where Wander can rest before his stamina runs out.

There is one other major sigil to take care of as well, and it's on the palm of its right hand, the hand that's holding the cleaver, so Wander must make the colossus drop it. There's a place the player can stab on the back of its right arm, where part of one of its "armbands" has broken off. The sword will indicate the right place. Do so and it'll drop the cleaver (it won't pick it back up). If the player destroyed the colossus' head weakpoint (and the one on its chest in Hard Mode), they can now drop to the ground.

The goal now is to have Argus attack Wander with its right hand so Wander can get to the weakpoint, so get in a good position for it to do that. Once it pounds the ground near him with its right hand, quickly jump onto its palm and hang on. It is also possible to climb to the hand by inching one's way down to its palm. This technique can be hard to accomplish on the first try. The colossus won't ever crush Wander by closing its fist, but it will make stabbing this point difficult by moving around wildly to shake Wander off.

Image of Argus taken from the official artbook.

Argus seen walking through the ancient ruins in which it dwells.

Wander facing off against Argus. 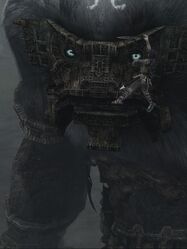 Wander holding on to Argus' mask. 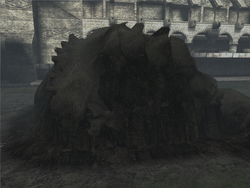 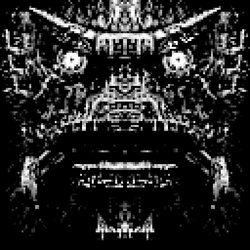 Game over screen of Argus. 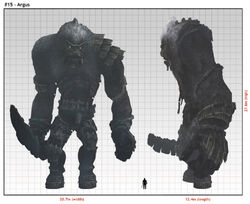 Argus climbing up from the valley.

Argus tilting one of the platforms.

Argus looks down at Wander. 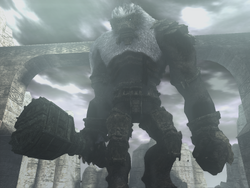 Argus in the E3 Demo. 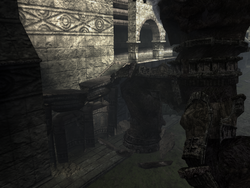 Argus destroying a barricade in the E3 Demo. 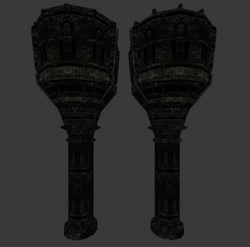 E3 Demo version of Valus' (left) and Argus' (right) clubs, they're identical albeit for the spikes on Argus' club.