Arena is the developer name given to the arena of the third colossus.

This circular canopy floats on the shore of a lake. The only thing peculiar at the top of the canopy is a circular plate at the center, where the colossus must swing down its sword, breaking its armor. The surrounding border is lower than where Gaius can walk on, so if you move to this location, the Colossus will not see you. Even if you fall into the lake by mistake, the game will not be over, so you can move around in peace.

The arena is located near the north of the Forbidden Lands, next to Stone Arch Gorge and the Ravine Entrance, at quadrant E2.

Wide view of the canopy. Picture by JK. 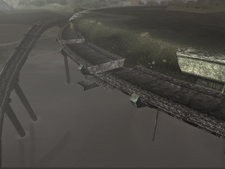 Broken part at the border of the Arena, with climbable grass. 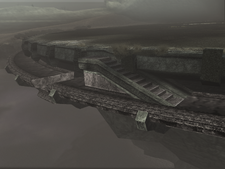 Stairs to the top of the Arena. 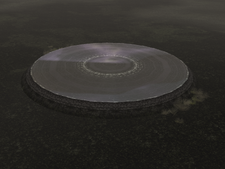 The circular plate at the center of the Arena. 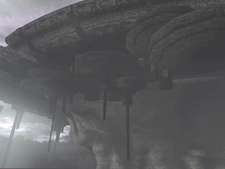 Underside of the Arena with strange tower-like structures. 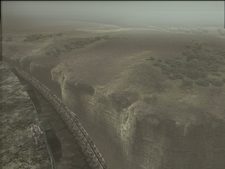 The land at the top of the mountains next to the Arena. Picture by JK. 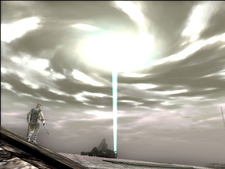 The top of the Arena in an earlier build. Note the beam of light that used to point to the colossus' location before the sword. 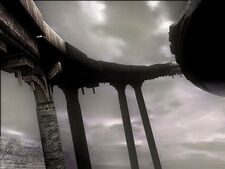 The circular bridge in the same early build. 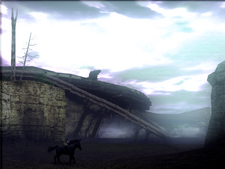 E3 Demo version of the Arena. Note how the circular bridge connects to the top. 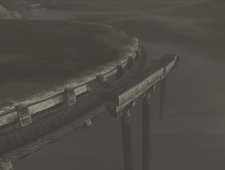 Close-up of the bridge in the E3 Demo. 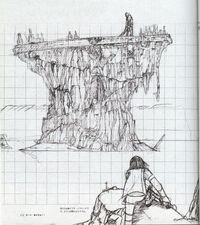 Sketch of the arena.